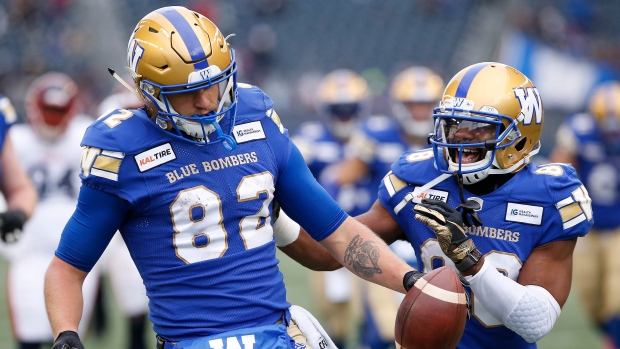 WINNIPEG — An offensive line moving like a juggernaut to drive Winnipeg's ground game got a lot of credit from coaches and players alike after an important 35-24 win by the Blue Bombers over the Montreal Alouettes on Saturday.

"We were able to control the line of scrimmage pretty much all game," said Andrew Harris, the CFL's leading rusher, who added another 166 yards and a touchdown to his season totals during the game.

"It starts with those five guys."

Winnipeg quarterback Chris Streveler, who rushed for 64 yards himself, was just as effusive.

"There were times when I thought Andrew was going to get three yards and he got nine," said Streveler, who also threw for one touchdown.

"Those guys were getting so much movement, pushing piles, I could see it on their eyes. . . . I'm so happy to be behind an offensive line like that that just loves to push people around."

Nick Taylor's fourth-quarter interception for a touchdown was a highlight but the Bombers (10-6) relied more on a solid ground game to beat the Alouettes.

Harris and Drew Wolitarsky both had TDs as the Bombers took a five-point lead into the second. Kicker Justin Medlock added three field goals before Taylor's interception the fourth and one more with less than two minutes left in the game.

A 90-yard runback by Mario Alford was Montreal's lone touchdown in the first half. Jake Wieneke added another in the third quarter and Boris Bede added a field goal. Quan Bray had a final score for the visitors with less than a minute left.

The Alouettes' loss clinched first in the CFL's East Division for the Hamilton Tiger-Cats. The Toronto Argonauts and Ottawa Redblacks have been mathematically eliminated from the post-season.

Like Montreal (8-7) in the East, Winnipeg has secured its playoff spot in the West but is still jockeying for a home game or perhaps even a bye into the division final.

Montreal quarterback Vernon Adams Jr., led the Alouettes back from a 20-point deficit to beat the Bombers at their last meeting, took a lot of blame for the loss.

"I've just got to get my eyes better I think, just get my eyes better and just see defenders and make those right throws," he said. "I've got guys open underneath and I'm forcing things too much late in the game trying to make things happen.

"It starts at QB position. I think our defence made enough plays for us to win that game. We got in the red zone quite a few times and I just wasn't finishing. . . I've just got to be better."

Streveler also gave credit to Winnipeg's defence for the pressure they put on Adams and the Montreal offence.

"When you take the ball away five times . . . it's unreal and that's awesome," said the Winnipeg QB, who inherited the starting job when Matt Nichols was injured in August.

Coach Mike O'Shea has been a staunch defender of Streveler, who has struggled at time with his passing game.

He edged Adams Jr. in accuracy Saturday night at 60 per cent to 59.4, competing 15 of 25 throws. But he threw for only 174 yards to Adams' 266, although he also threw only two picks compared with the four thrown by his competition.

"I thought he did well, I thought he saw the field really well as in every game," said O'Shea.

"I'm sure there's a throw or two he wants to have back. . . . I like the way he played. I thought he had great presence out on the field, I thought he showed great confidence and poise. He did his job."