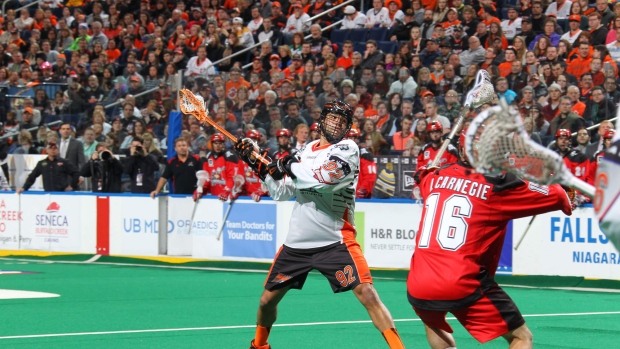 The National Lacrosse League announced finalists for the 2021-22 end of season awards on Wednesday.

The Most Valuable Player, Rookie of the Year and Goaltender of the Year award finalists were first announced during halftime of Game 3 of the NLL Finals between the Buffalo Bandits and Colorado Mammoth.

The top three vote getters for each award are listed as the finalists, and all awards were voted on prior to the start of the 2022 playoffs. These awards are based solely on regular season statistics and performances.

Reid Bowering, transition for the Vancouver Warriors, headlines the Rookie of the Year finalists. He caused 34 turnovers, tied for 5th in the league, and registered 25 points. The other finalists for Rookie of the Year are Patrick Dodds, forward for the Panther City Lacrosse Club, who scored 26 goals and totaled 84 points, and Jeff Teat, forward for the New York Riptide, who led all rookies with 37 goals, 71 assists, and 108 points.

Vinc, Nick Rose of the Toronto Rock and Dillon Ward of the Mammoth are the Goaltender of the Year award finalists. Rose won 13 games, and his 9.05 goals against average led all goaltenders who played more than 500 minutes. Ward won nine games, and his .804 save percentage was second in the league behind Vinc's .807 amongst goaltenders who played more than 500 minutes.

The finalists for Transition Player of the Year include the rookie Bowering, Zach Currier of the Calgary Roughnecks and Challen Rogers of the Rock. Currier led the league in loose balls (237) and caused turnovers (62), each by a wide margin. Rogers was stronger on the offensive end, finishing with 21 goals and 49 points.

Keegan Bal of the Warriors, Dan Dawson of the Rock and Lyle Thompson from the Georgia Swarm are the finalists for the Sportsmanship award, which honours the combination of character and performance shown by a player. Thompson has claimed the award each of the last three seasons and the forward finished this season tied for the league lead in goals with 47 and 102 points in total. Dawson appeared in just 14 games this season and finished with 45 points. He won the award in 2009 and was a runner-up in 2019. Bal finished with 44 goals and 99 points this season.

The Teammate of the Year award, which honours similar traits as the Sportsmanship award, is headlined by Currier, Jeff Shattler of the Rush and Jeremy Thompson of Panther City.

Panther City contributed finalists for each of the executive awards, including Tracey Kelusky for Head Coach of the Year, Bob Hamley for General Manager of the Year and Greg Bibb for Executive of the Year. The team finished with a 7-11 record and missed the playoffs.

From Toronto, Matt Sawyer is a finalist for Head Coach of the Year as well as Jamie Dawick for GM of the Year and Executive of the Year. The Rock made the playoffs after a 13-5 regular season but were eliminated in the semifinals by the Bandits.

The Bandits' John Tavares is nominated for Heads Coach of the Year, while Steve Dietrich is a finalist for GM of the Year following the team's 14-4 regular season. The Riptide's Rick Lisk is the final nominee for Executive of the Year.

The winners of the awards are scheduled to be announced on June 27th.