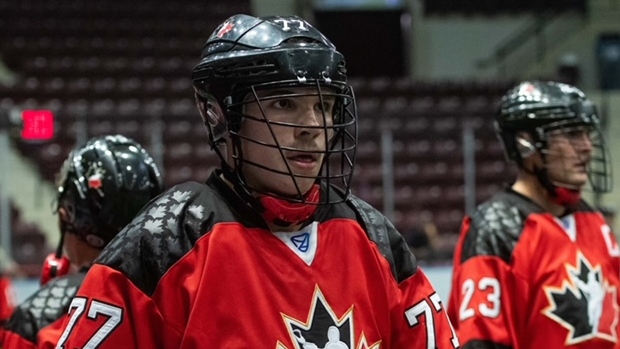 Participating in past World Junior Lacrosse Championships helped pave the way for talented players like Haiden Dickson (2019 draft, Calgary Roughnecks) and Brad Lyons (2018 draft, Toronto Rock) to be selected in the National Lacrosse League entry draft, earning a chance to further their careers in the sport.

Seven players at this year’s edition of the WJLC are hoping they can follow the same path by performing well at the Aug. 12-14 tournament in Winnipeg and boost their ranking among the prospects vying to be selected by NLL teams on Aug. 28, when the league gathers in Buffalo for its annual draft.

The 2021 IIJL World Junior Lacrosse Championship may just be more important than ever in that regard, given how there have been limited opportunities to play and be seen by scouts in the last 18 months during the COVID-19 pandemic.

The 2021 WJLC features a three-game, total-goal series between Canada East and Canada West. Eight other nations were scheduled to take part in the tournament, but ongoing pandemic challenges and protocols necessitated a pivot.

The Canada West roster boasts four players who are eligible to be drafted later this month. A pair of them have declared early for the draft, forfeiting any remaining NCAA eligibility so they can be considered for selection.

Aidan Danby and Bryce Schmermund are both big defenders who were both born in 2001, and both played with Canada at the 2019 WJLC in Mississauga, winning gold medals.

Danby has been named an alternate captain for Canada West this year and has quickly taken on a leadership role with the team during training camp at the Canada Life Centre. The Penticton, B.C., native is trying to forge the unusual path to professional lacrosse from the interior of British Columbia. Danby did make his way to the West Coast to play for the Junior A Delta Islanders, and now he's looking to continue climbing in the sport.

Schmermund, who hails from St Albert, Alta., didn't have as much of an opportunity to play with the Junior A St Albert Miners this summer as his work schedule was impacted by the pandemic.

To keep playing, he suited up with the Junior B Crude Lacrosse in neighbouring Edmonton. With the Crude, Schmermund was pressed into playing a more offensive role and he responded with higher scoring stats than he's posted in years while focusing on defence.

Troy Gutowski is of Metis heritage and hails from Winnipeg. The tournament is the forward’s lacrosse homecoming because Gutowski has followed his dream of playing at the highest level of the sport that he can.

From the Manitoba Blizzard Junior B team to Junior A stints in Port Coquitlam, B.C., and Saskatoon, Gutowski is also studying nursing at Red River College, hoping that his slick hands will garner him some attention ahead of the NLL draft.

Defenceman/transition player Hunter Aggus is hoping the third time's the charm at the draft. He declared for the 2019 draft as a 19-year-old but went undrafted both then and in 2020.
Maturing on and off the floor, Aggus has caught the eyes of prospect evaluators and is projected to be a possible second-round selection this year.

The East's 2021 NLL draft prospects are led by Jordan Ackie, one of the team's alternate captains, who also is one of the few players appearing in his third WJLC.

Ackie is a defensive standout who also excels at the faceoff dot. He’s projected as a solid second-round prospect with a chance to climb into the first round on Aug. 28.

Defenceman Will Cecile played four years with his hometown Junior B Windsor Clippers before deciding to make the move up to Junior A with the Burlington Chiefs. He does have previous World Juniors experience, having suited up for Canada U17 back in 2016. The speedy transition player is studying nursing at the University of Windsor and hopes to combine a career serving in the health care field with a shot at playing professional lacrosse.

Hayden Coulter is a big righty forward (6-foot-4, 200 pounds) for Canada East. The road to the NLL from Junior B lacrosse is not an easy one, but many players have managed to make it happen and Coulter hopes to follow in their footsteps.

After starring for three seasons with his hometown Owen Sound Junior B North Stars, Coulter is studying at Laurier University, where he'll get a chance to participate in high-level field lacrosse as part of the Canadian University Field Lacrosse Association.

The NLL draft is just a couple of weeks away, and all seven draft-eligible players at the World Junior Lacrosse Championship are hoping this weekend in Winnipeg is a stepping stone en route to hearing their names called in Buffalo.