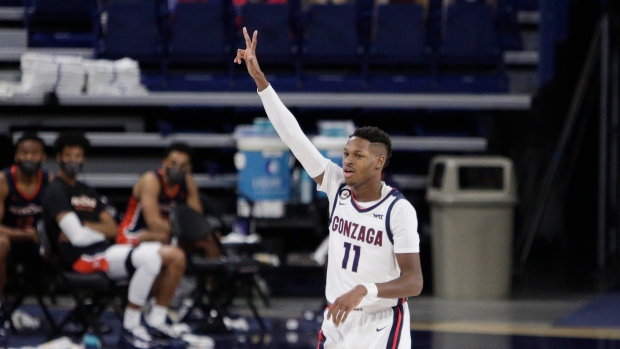 SPOKANE, Wash. -- Corey Kispert had 23 points and eight rebounds as top-ranked and undefeated Gonzaga beat Pepperdine 95-70 on Thursday for its 17th consecutive victory over the last two seasons.

Gonzaga has also won 46 straight home games, the longest streak in the nation.

Kessler Edwards scored 14 for Pepperdine (4-6, 0-1), which was playing its first game since Dec. 23 because of COVID-19 protocols.

Pepperdine hounded Gonzaga into 36% shooting in the first 12 minutes of the game and trailed just 23-21.

Sedrick Altman's basket gave the Waves a 26-25 lead, but Jalen Suggs completed a three-point play to ignite a 16-4 run that put Gonzaga up 41-30.

Edwards replied with consecutive 3-pointers and Darryl Polk added a 3-pointer at the buzzer as Pepperdine cut Gonzaga's lead to 43-39 at halftime.

Ayayi had 14 points and four steals at the half for Gonzaga.

Gonzaga went on a 15-4 run midway through the second to take a 65-48 lead with 11 minutes left. The Waves made only 4 of 17 shots to open the second half and could not close the gap.

Pepperdine: The Waves gave Gonzaga a scare in the last game in Spokane, losing just 75-70 on Jan. 4 ... The Waves started the season strong, but have slumped recently, losing four of their last five ... Colbey Ross is second in the West Coast Conference, averaging 19 points per game, but was shut down Thursday, scoring nine points.

Gonzaga: The Bulldogs came in as one of nine unbeaten teams left in the nation ... Gonzaga leads the nation with an average of 96.1 points per game and in shooting at 55.6% ... For the second straight week, Ayayi was named the WCC Player of the Week after recording the first triple-double in program history in a win at Portland.

A win at Saint Mary's on Saturday would likely keep the Zags on top of the Top 25.