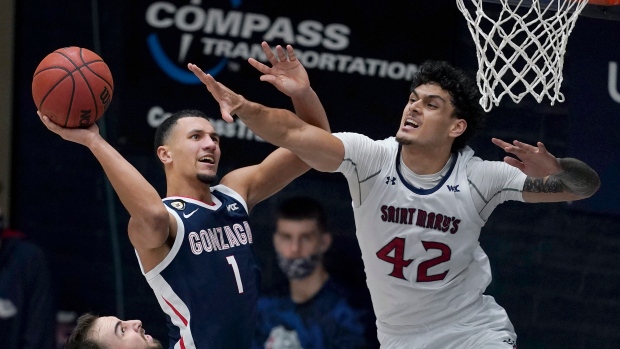 MORAGA, Calif. -- Corey Kispert had 17 points and five rebounds and No. 1 Gonzaga overcame a slow start with a surge to end the first half, pulling away late to beat rival Saint Mary's 73-59 on Saturday night for its 18th straight victory spanning the past two seasons.

A 4.5-magnitude earthquake in the South Bay shook the gym early in the second half. Play continued with no disruption at what typically would be an imposing visiting arena at McKeon Pavilion but had a far different feel devoid of fans.

Gonzaga's smothering defence pushed the Gaels right up against the 30-second clock early, but Saint Mary's made 4 of its first 5 3-point tries.

The Zags are tied with Winthrop for longest winning streak in the country. They ran the nation's best unbeaten streak at home to 46 against Pepperdine on Thursday night.

Johnson drew a big charge against Ayayi at the 13:31 mark of the first half as Saint Mary's built a 12-7 lead and the Zags started 2 of 7 from the floor. Kuhse took a charge late in the first half on an offensive foul by Jalen Suggs, who scored 14 points.

Gonzaga: The Zags made three quick steals and wound up with six, two from Anton Watson. ... Senior forward Kispert moved one win away from eighth place in program history for most career victories -- he's 109-10. ... Aaron Cook scored eight points and is six from 900 for his career. ... The Zags have won 19 of the last 23 in the series and are be 48-11 vs. the Gaels under 22nd-year coach Mark Few. ... They have won 23 January games in a row.