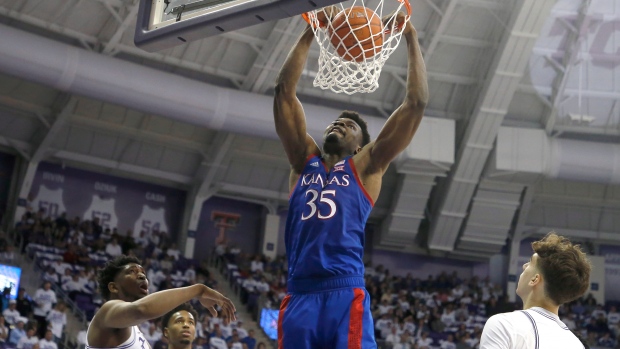 WACO, Texas (AP) — Udoka Azubuike and No. 3 Kansas returned the favor in a Big 12 showdown that lived up to the hype.

The Jayhawks share the Big 12 lead again, and could return to the No. 1 spot in the AP poll, as well.

“You could just feel the buzz. It was an exciting time and a huge win,” Jayhawks guard Devon Dotson said. “We’re a solid team that can make a run in late, late March. ... We’re going to enjoy this win, but build off it for sure.”

Isaiah Moss, who had 11 points, made two free throws for Kansas with 7.9 seconds left before a timeout. The Bears had one more shot, but Jared Butler’s 3-pointer from beyond the top of the key ricocheted off the front of the iron as time expired.

Butler and MaCio Teague had hit consecutive 3-pointers in the final half-minute to get Baylor within 62-61.

Dotson added 13 points for the Jayhawks, who shot 51% (27 of 53) against a tenacious Baylor defense that held them to 55 points in a 12-point loss last month that ended their 28-game home winning streak.

Butler had 19 points to lead the Bears, while Freddie Gillespie and Matthew Mayer each had 10.

The sellout crowd of 10,627 at the Ferrell Center, including 2011 Heisman Trophy winner Robert Griffin III along with Waco favorites Chip and Joanna Gaines, was already in a frenzy after ESPN’s College GameDay broadcast on the court leading up to the late-morning tip.

Fans were roaring after Teague, who missed the previous two games with a wrist injury, returned to the lineup by swishing a 3-pointer on the game’s first shot and Gillespie made it 5-0.

But Marcus Garrett then had seven points in a 14-2 spurt for Kansas, which never trailed again. Baylor hadn’t been behind by more than two points in any of its previous 12 home games.

The Bears trailed 14-7 before Butler hit a 3-pointer and then had a long pass ahead to Mayer for a layup as the lanky, high-energy sophomore scored eight points in two minutes to tie the game before Kansas went ahead to stay with six points in a row.

That quick Jayhawks spurt included two baskets by Azubuike, who later in the half had back-to-back impressive dunks for nine-point leads.

Azubuike bowed back his shoulders and let out a shout after his powerful slam over the 6-foot-9 Gilliespie. The Jayhawks’ next basket was also a powerful dunk by Azubuike that made it 32-23. He finished 11-of-13 shooting, with at least seven dunks and other inside shots.

“He was great. They did such a great job winning the first time because we had nothing from a scheme standpoint to help him, and today we we were able to fill the ball over the top quite a bit,” Self said. “That’s as about as well overall I’ve seen him play. He was terrific.”

“The guy can play basketball. The dude can rebound, finishes at the rim, and he does it really well,” Gillespie said. “I think our first game we did a better job as a team keeping him out of his rhythm. This game he was in sync.”