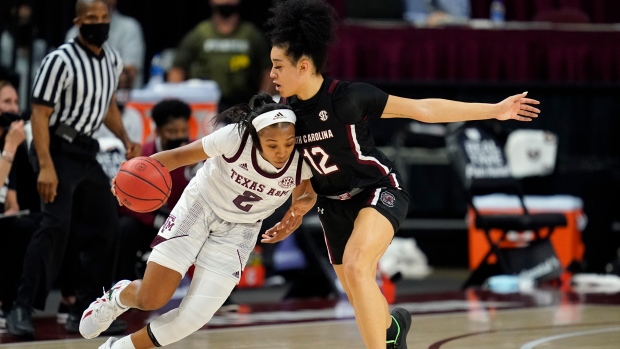 COLLEGE STATION, Texas (AP) — The third-ranked Texas A&M Aggies have insisted all year that they should be considered one of the nation’s best teams.

When given the chance to shine against another top-5 team on Sunday, they proved it.

“We needed to win this game to solidify who were were and what we’ve earned,” Texas A&M coach Gary Blair said.

Aaliyah Wilson scored 17 points and N’dea Jones added 16 to lead Texas A&M to a 65-57 win over fifth-ranked South Carolina to give the Aggies their first regular-season Southeastern Conference title.

Jones said they had a team meeting before the season to set their goals and make sure everyone knew how important being vigilant about coronavirus protocols would be to their season.

“We knew that we could win it,” she said. “We just needed to follow protocols and stay with it and we could be here.”

It’s the 10th straight victory for the Aggies and their ninth win over a ranked opponent this season, which leads the nation. Texas A&M (22-1, 13-1 SEC) snapped a seven-game skid against South Carolina and finished the season 13-0 at home after playing in front of a season-high 2,700 on Sunday.

“We’re the two best teams in the SEC and we had to prove it night in and night out,” Blair said. “Now it’s up to both of us to throw this season away and start all over at the SEC tournament and the NCAA tournament.”

The Gamecocks trailed by as many as 14 in the fourth quarter but cut the lead to 3 on a 3-pointer by Aliyah Boston with about three minutes to go.

Wilson pushed Texas A&M’s lead to 62-57 on a basket with less than 90 seconds remaining and Kayla Wells added two free throws with 12 seconds left to secure the victory.

“It’s not always pretty but we find a way... we just keep having each other’s backs,” Wilson said.

The Aggies outscored South Carolina (19-4, 14-2) 19-8 in the third quarter to take a commanding lead before the Gamecocks get back in it late.

Destanni Henderson and Zia Cooke had 15 points each for the Gamecocks, who won both the SEC regular-season and conference tournament titles last season.

“We’re expected to win championships and this was within our reach, but we just ran out of gas,” coach Dawn Staley said. “We just didn’t have enough in the tank.”

Texas A&M led by 14 early in the fourth before South Carolina used a 9-0 run, with the first seven points from Cooke, to get within 56-51 with about 5 ½ minutes remaining.

The Aggies added one free throw before Henderson’s 3-pointer cut the lead to 57-54 with five minutes to go.

Texas A&M was up by 1 at halftime and scored the first 10 points of the second half to make it 45-34 with about four minutes left in the third. Jordan Nixon started that run with a jump shot and capped it with a 3-pointer.

The Gamecocks couldn’t do anything right in that stretch, missing seven shots and committing four turnovers. They got their first point of a period when Cooke made one of two free throws with about three minutes left in the quarter.

“When you miss a layup and you give up an easy basket at the other end — when that happens continuously it takes a toll on you,” Staley said.

The Aggies added a basket after that before South Carolina got its first field goal of the second half on a layup by Lele Grissett a few seconds later.

The Gamecocks finished the quarter with a 5-2 spurt to cut the lead to 52-42 entering the fourth.