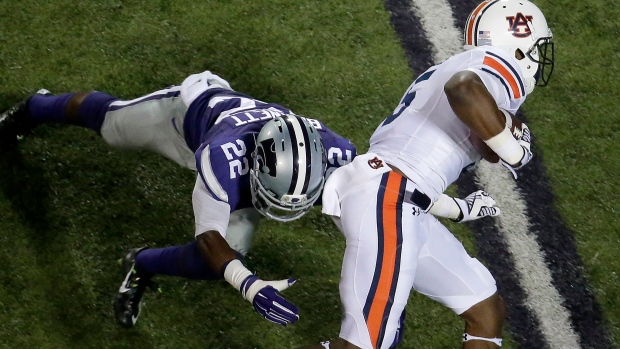 Marshall finished with 231 yards passing for the Tigers (3-0), who were forced to the air by a Wildcats defence that was bent on stopping the run. The nation's sixth-ranked rushing attack had only 130 yards on the ground, 200 less than its season average.

Not that it mattered the way Kansas State (2-1) squandered its chances.

Jake Waters threw for 245 yards, but he also tossed two interceptions -- one in the Auburn end zone. The Wildcats also fumbled the ball away, and Jack Cantele missed three field-goal attempts.

Kansas State tried to mount a rally in the closing minutes, scoring on a run by Charles Jones out of the wildcat formation with 3:49 left. After the kickoff, Auburn soon faced third-and-9 at its own 37 with 2:06 left. Marshall dropped back and found D'haquille Williams running wide open downfield, and the 39-yard completion resulted in a first down and effectively ended the game.

Auburn was the highest-ranked team to play in Manhattan since second-ranked Penn State in 1969, and an overflow crowd started tailgating Tuesday. The festivities continued until shortly after kickoff, when the Wildcats started to throw away opportunities to spring an upset.

The first serious miscue was a fumbled handoff deep in Kansas State territory. Auburn hopped on the loose ball and, four plays later, kicked a 34-yard field goal to take a 3-0 lead.

The second turnover was even more costly. The Wildcats had second-and-goal from the Auburn 2, and Waters zipped a pass that bounced off Tyler Lockett's shoulder pads in the end zone. Rather than an easy touchdown, the ball was picked off by the Tigers' Jonathan Jones.

The Wildcats kept buckling down on defence, though, stuffing Auburn's read-option attack. The Tigers had just 55 yards rushing in the first half, the fewest in the Gus Malzahn era.

Kansas State finally scored with 4:56 left in the first half when DeMarcus Robinson scampered in from 3 yards out for his first career touchdown. But the Tigers hurried the other way, capping a 75-yard drive with Marshall's 40-yard strike to Ricardo Louis for a 10-7 lead.

Cantele pushed a potential tying field-goal attempt wide on the final play of the half, his second miss of the night. He hooked one wide left late in the first quarter.

He made it a frustrating hat-trick midway through the third quarter.

The Wildcats had once again marched downfield, and once again pushed the ball inside the Auburn 5. But after the Tigers stiffened, Cantele was summoned to try a 22-yarder -- a mere chip-shot, hardly more than an extra point. He missed it wide right.

Given a chance to put the game away, Auburn quickly capitalized.

Riding on the broad shoulders of running back Cameron Artis-Payne, Auburn marched 80 yards amid the din of the 15th straight sellout at Bill Snyder Family Stadium. Marshall then capped it with a nifty fade pass to Williams in the corner of the end zone for a 17-7 lead.

Daniel Carlson tacked on his second field goal of the night to build on the cushion.