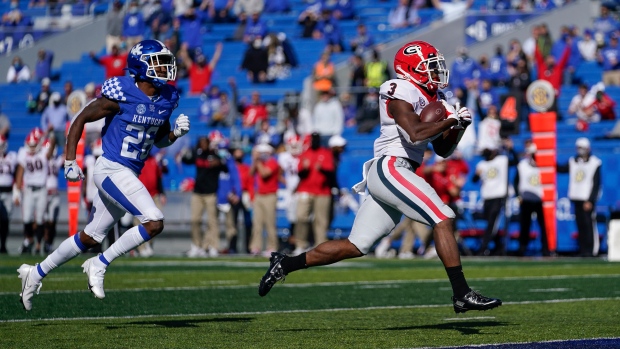 LEXINGTON, Ky. — Zamir White rushed for 131 yards and a touchdown, Stetson Bennett also ran for a score and No. 5 Georgia beat Kentucky 14-3 on Saturday for its 11th straight win in the series.

Their scores opened both halves as the Bulldogs (4-1 Southeastern Conference) improved to 5-1 after byes under coach Kirby Smart. Georgia’s 215 yards on the ground nearly outgained the Wildcats’ total yardage (229).

Bennett completed 9 of 13 passes for 131 yards with two interceptions.

White carried 26 times, including a fourth-and-1 burst for an easy 22-yard TD and double-digit lead early in the third quarter. Bennett’s 2-yard score capped an 86-yard, 12-play initial drive that set the tone for Georgia’s control of the line of scrimmage.

James Cook added 39 yards rushing on six carries and Kendall Milton 31 on eight attempts as Georgia earned its longest winning streak against Kentucky. The Bulldogs also bounced back from a loss at No. 2 Alabama two weeks ago.

Chris Rodriguez rushed 20 times for 108 yards for Kentucky (2-4), which only managed Matt Ruffolo’s 34-yard field goal in dropping its second in a row. Quarterback Joey Gatewood was 15 of 25 passing for 91 yards in his first start in place of Terry Wilson, who was out with an injured wrist.

Georgia was workmanlike but likely reinforced its top-five credentials with the win.

Georgia was nothing if not methodical in opening both halves with impressive touchdown drives. More importantly, the Bulldogs’ defense made sure Kentucky stayed primarily with the run before shutting it down at key times to keep the Wildcats out of the end zone. They also recorded four sacks.

Kentucky’s offense figured to stay on the ground in Gatewood’s first start, and the Wildcats had their moments with Rodriguez and the QB running the ball. But they reached Georgia territory just twice and Gatewood fumbled away a solid opportunity at the 36.

Georgia faces No. 10 Florida on Saturday in the annual rivalry showdown in Jacksonville, Florida.

Kentucky has a bye before hosting Vanderbilt on Nov. 14.