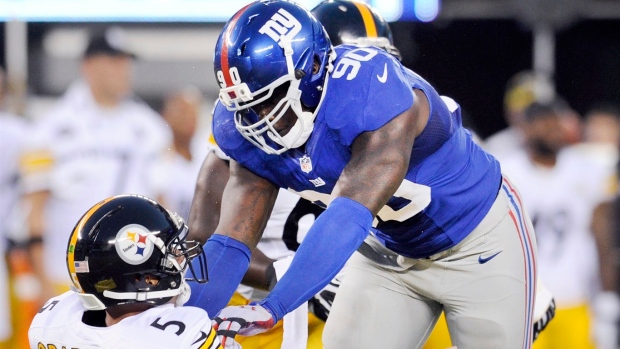 Coach Tom Coughlin announced the decision Wednesday after the team examined the right hand that Pierre-Paul injured in a fireworks accident on the July Fourth holiday.

While saying Pierre-Paul was in good shape and in an outstanding frame of mind after reporting Monday, Coughlin said the team did not feel he was ready to come back. Coughlin says there is no timetable for his return.

"He's worked pretty hard," Coughlin said. "We actually saw a tape that showed him working. He's done a lot of conditioning-type work. So I don't think there's anything to worry about there. Obviously, it'd be great if he was all healed and ready to go, but he's not."

Coughlin did not describe the injury to Pierre-Paul's right hand.

Pierre-Paul did not let the Giants examine his hand after it was injured, so the Giants had to wait until Monday to see it for the first time.

The coach also felt that Pierre-Paul's inability to play wouldn't demoralize the team.

"Nothing's changed," Coughlin said. "We've taken this path and we're on it, and we'll stay on it. Hopefully at some point in time, Jason will be ready to play, and we'll get the green light. If that doesn't happen, we'll stay where we are."

Before the doctors examined Pierre-Paul on Monday, Coughlin had said he would consider using him in the season opener against the Cowboys in Dallas on Sunday night. That's out of the question now.

Pierre-Paul returned to Florida to continue working out. He has not signed his franchise tender, worth $14.8 million for the season.

Once he does, the Giants will likely put him on the non-football injury list so they don't have to pay him until he is ready to play.

Pierre-Paul has been the Giants' playmaker on defence in recent years. He had a team-high 12 1/2 sacks last season.

Teammates were not shocked that Pierre-Paul will be absent Sunday.

Veteran lineman Cullen Jenkins said the defence is taking the same approach it has since training camp opened in late July.

"We have to hold it down until we get him back," Jenkins said. "It's the same as if you had a player who misses a couple of weeks with injury or something like that."

Coughlin said the 26-year-old Pierre-Paul was optimistic about his future.

Pierre-Paul is entering his sixth NFL season. A first-round pick in 2010, he helped the Giants win the Super Bowl the next season with 16 1/2 sacks.