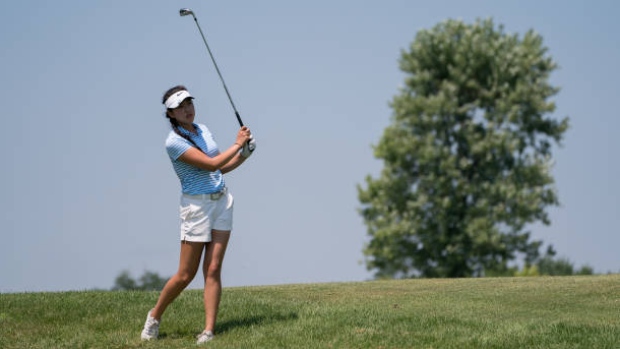 PORTLAND, Ore. — Monday qualifier Yealimi Noh shot an 8-under 64 Saturday for a three-shot lead heading into the final round of the Portland Classic.

The 18-year-old Noh, who turned down an offer to play for UCLA and instead went pro in February, made eight birdies and moved to 19 under at Columbia-Edgewater Country Club. Hannah Green of Australia is second at 16 under after a third-round 73.

Noh, playing in her seventh event on the tour this year, was asked afterward if she did any scoreboard watching during her bogey-free round. Her previous best finish was a tie for sixth at the Thornberry Creek LPGA Classic.

"On front nine, I was kind of looking at the leaderboard, but toward the end, I didn't — actually, I didn't even know what I shot on the back nine," she said.

Canadian Brooke Henderson and Brittany Altomare were two strokes back of Green heading into the final day. Altomare is on the U.S. Solheim Cup team, which heads to Scotland for the biennial match-play team competition at the PGA Centenary Course at Gleneagles on Sept. 13-15.

Noh was reminded that Henderson won the Portland Classic as a Monday qualifier in 2015. The only other to win on the tour was Laurel Kean, at the 2000 State Farm LPGA Classic.

"That would be really, really cool. She's doing so well right now," Noh said about Henderson. "That's just really cool, Monday qualifying and winning, but I don't want to think about that tomorrow. Just go out and play my game, but really hope that's the result."

Henderson earned her tour membership with the victory in Portland.

"Yeah, you know, in my case, I had I think a five-shot lead on Sunday, so I was just terrified. Just like don't give that away. I was just trying to make more birdies and stay ahead of the crowd," she said.

The 72-hole event that started in 1972 is the tour's longest running non-major event.

Noh was asked what a Sunday victory would mean.

"It would change my entire like, year, my life," she said. "That would just be a dream come true."