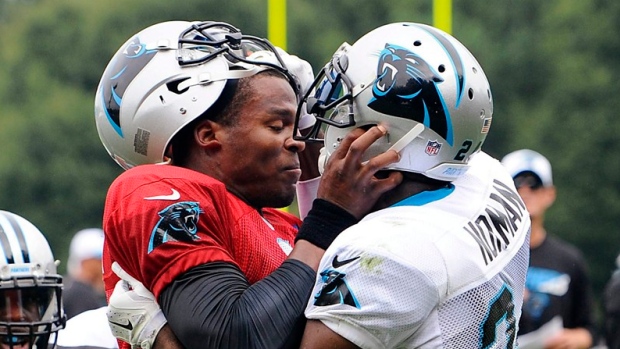 SPARTANBURG, S.C. - Panthers cornerback Josh Norman said he has nothing but "mad respect" for Cam Newton and there are no hard feelings between he and the star quarterback following a training camp scuffle earlier this week.

Norman even posted a selfie of himself and Newton on his Twitter account Tuesday night after the team watched the latest "Mission Impossible" movie together.

Norman, speaking for the first time since Monday's scuffle, said tempers sometimes flare "when you're competitive and have that fire within you (and) both of you want to win so bad."

The fourth-year cornerback said the two quickly put the incident behind them after practice when they met up in the locker room.

He said there have been no problems since and doesn't expect any in the future.

Norman posted on Twitter there is no other quarterback he would want to be on the same team with, adding that with the athletic 6-foot-5, 245-pound Newton at the helm the Panthers "can do a lot of special things."

A heated shoving match broke out between the two players after Norman intercepted Newton and stiff-armed the quarterback on his way to the end zone. An angry Newton chased down the vocal cornerback, tackled him and the two wound up on the ground and had to be separated by teammates after days of trash talking at practice.

When asked if he stiff-armed Newton on purpose, Norman said, "I don't know, I was running the ball. I was trying to score."

Norman said he likes Newton's aggressiveness and desire to win.

"He's fun to play with," Norman said. "He comes and tries to tackle us every time (there is an interception). I saw him and I was toying around. That's Cam. He's going to be that guy to go and chase the ball."

Newton said Tuesday that he looked at the incident as a good thing and that both players are simply pushing each other to get better.