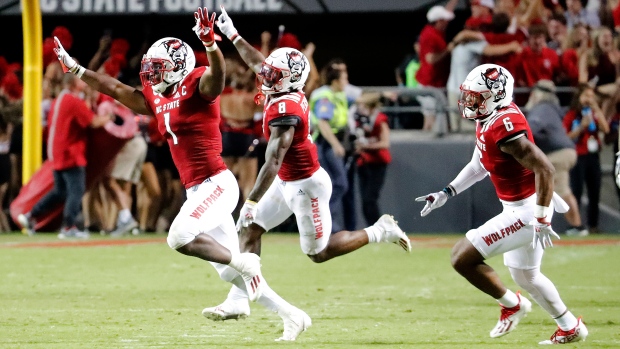 RALEIGH, N.C. (AP) — North Carolina State forced D.J. Uiagalelei into a fourth-down incompletion in the second overtime to beat ninth-ranked Clemson 27-21 on Saturday, an outcome that shakes up the Atlantic Coast Conference race and deals a huge blow to the Tigers’ College Football Playoff hopes.

Uiagagelei slightly overthrew Justyn Ross near the goal lineto end it, sending the Wolfpack sprinting in from the sideline followed immediately by red-clad fans pouring onto the field to celebrate N.C. State’s first win in the series in a decade.

Devin Leary threw for four touchdowns, including the winning 22-yard pass to Devin Carter to start the second OT.

N.C. State (3-1, 1-0 ACC) controlled play most of the way, nearly doubling Clemson in total offense through regulation while converting more than half of its third-down chances.

It was a brutal day for the Tigers (2-2, 1-1), who now have a second loss to make it an unlikely climb to extend their streak of making every year of the playoff.