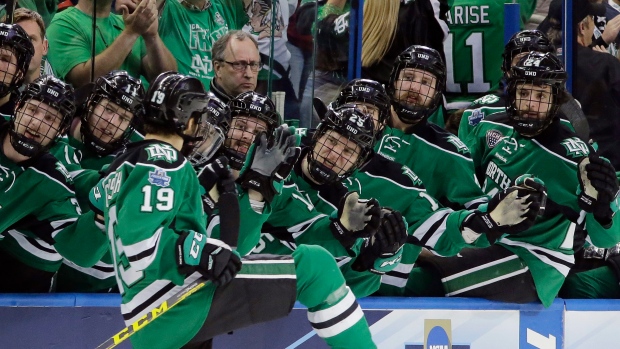 Cam Johnson had 32 saves for the Fighting Hawks (34-6-4). They won their first national title since 2000 to pull within one of Michigan for the record.

Caggiula, of Whitby, Ont., scored in each of North Dakota's four tournament wins. He also had two goals in a 4-2 victory over Denver that sent the Fighting Hawks into the Frozen Four final for the 13th time.

Quinnipiac (32-4-7) lost in the title game for the second time in four seasons. The Bobcats trailed 2-1 entering the third period, but their hopes for a first championship faded quickly when Caggiula beat goalie Michael Garteig twice in just over two minutes to break the game open before a crowd of 19,358.

Boeser is just the third freshman to lead North Dakota in scoring. After assisting on Shane Gersich's first-period goal, he put North Dakota up to 2-0 with a short-handed goal set up when Garteig left Quinnipiac's net unattended to try to clear a loose puck from the left circle.

Instead, the goalie from Prince George, B.C., wound up flicking the puck into Boeser's body, and the right wing was left with an easy shot for his 27th goal of the season.

North Dakota coach Brad Berry became the only first-year head coach to win the NCAA title. Jeff Sauer led Wisconsin to the 1983 national championship in his first season with the Badgers, however he had previously spent 11 years at Colorado College.

Quinnipiac advanced to the final with a 3-2 victory over Boston College on Thursday.

North Dakota, meanwhile, weathered blowing a two-goal, third-period before scoring twice in the final minute to beat Denver 4-2 and reach the title game for the first time since 2005.

The Fighting Hawks won all three previous meetings between the teams, including a first-round victory in the 2015 NCAA tournament. They entered Saturday night with a nation-leading 33 victories, one more than Quinnipiac, which was trying to become the fourth consecutive team to leave the Frozen Four with its first national crown.

Providence took the 2015 title, Union won two years ago, and Yale claimed its first crown by beating Quinnipiac in the 2013 final in Pittsburgh. Throw in Minnesota Duluth's title in 2011, and four of the past six winners have been first-time champions, an interesting trend considering before that stretch there had not been a first-time winner since Maine in 1993.