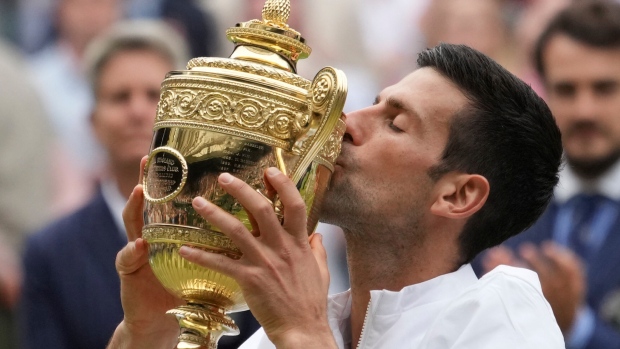 The No. 1-ranked Djokovic earned a third consecutive championship at the All England Club and sixth overall.

He adds that to nine titles at the Australian Open, three at the U.S. Open and two at the French Open to equal his two rivals for the most majors won by a man in tennis history.

“I have to pay a great tribute to Rafa and Roger. They are legends. Legends of our sport. They are the two most important players that I ever faced in my career," said Djokovic, a 34-year-old from Serbia. “They are, I think, the reason that I am where I am today. They’ve helped me realize what I need to do in order to improve, to get stronger mentally, physically, tactically.”

Djokovic is now the only man since Rod Laver in 1969 to win the first three major tournaments in a season. He can aim for a calendar-year Grand Slam — something last accomplished by a man when Laver did it 52 years ago — at the U.S. Open, which starts Aug. 30.

“I’m hoping. I’m going to definitely give it a shot,” Djokovic told the Centre Court crowd during the trophy presentation. “I’m in a great form and obviously playing well and playing my best tennis at Grand Slams is the highest priority that I have right now at this stage of my career. So let’s keep it going.”

This was his 30th major final — among men, only Federer has played more, 31 — and the first for Berrettini, a 25-year-old from Italy who was seeded No. 7.

“Hopefully,” Berrettini said, “it’s not going be my last one.”

It was a big sporting day in London for Italians: Their national soccer team faced England at Wembley Stadium in the European Championship final at night.

With Marija Cicak officiating, the first female chair umpire for a men's final at a tournament that began in 1877, play began as the sun made a rare appearance during the fortnight, the sky visible in between the clouds.

The opening game featured signs of edginess from both, but especially Djokovic, whose pair of double-faults contributed to the half-dozen combined unforced errors, compared with zero winners for either. He faced a break point but steadied himself and held there and, as was the case with every set, it was Djokovic who took the lead by getting through on Berrettini's speedy serve.

Berrettini came in with a tournament-high 101 aces and that's where his game is built: free points off the serve and quick-strike forehands that earned him the nickname “Hammer.”

Those powerful strokes sent line judges contorting to get their head out of harm's way. Djokovic occasionally took cover himself, crouching and raising his racket as if it were a shield to block back serves aimed at his body.

Not many opponents manage to return serves at 137 mph and end up winning the point, but Djokovic did that at least twice. And the big groundstrokes that the 6-foot-5, barrel-chested Berrettini can drive past most other players kept coming back off Djokovic's racket.

That's what Djokovic does: He just forces foes to work so hard to win every point, let alone a game, a set, a match.

Indeed, this one could have been over much sooner than the four sets and nearly 3 1/2 hours it lasted: Djokovic took leads of 4-1 in the first set, 4-0 in the second and 3-1 in the third. But in the first, especially, he faltered in ways he rarely does, wasting a set point at 5-2 and getting broken when he served for it at 5-3.

In the ensuing tiebreaker, they were tied at 3-all, but Berrettini won three of the next four points with forehands, and closed it out with a 138 mph ace.

He strutted to the changeover and many of the nearly 15,000 spectators rose to celebrate along with him.

Chants of “Ma-tte-o!” rang out early in the third set. Soon, others responded with Djokovic’s nickname, “No-le!” Later in the set, Djokovic held his racket to his ear and motioned for more support.

But Djokovic is nothing if not a fighter, and he blunted Berrettini's best efforts and won the fans over, too. When it as over, Djokovic dropped to his back on the turf, arms and legs splayed, showered by fans' cheers.

There were some magical moments, points that contained brilliance by both.

On one, Berrettini somehow came up with a back-to-the-net, between-the-legs lob that Djokovic somehow tracked down to flick a response with his own back to the court, but it ended up in the net.

On another, which lasted 15 strokes, Djokovic slid into a keep-the-point-going defensive backhand and, after Berrettini replied with a drop shot, sprinted all the way up for a winner. Djokovic raised his index finger — as if to remind everyone, “I’m No. 1!” — and Berrettini flipped his racket end over end, caught it and smiled.

What more could he do?

Not much anyone can do against Djokovic, it seems.

He has collected eight of the past 12 major trophies — all since turning 30, the most by a man past that age.

And for all of the questions in recent years about when the younger generation would step forward and stop the progress of the Big Three, turns out Djokovic is singlehandedly holding off the kids.

In this year’s three majors, he is 21-0. In the finals, he beat a trio of 20-somethings ranked in the ATP's top 10: 25-year-old Daniil Medvedev on the hard courts of the Australian Open, 22-year-old Stefanos Tsitsipas on the red clay of the French Open and now Berrettini on the grass.

“He’s writing the history of this sport,” Berrettini said, “so he deserves all the credit.”

On Sunday, Djokovic made merely 21 unforced errors, while accumulating 21 winners. He limited Berrettini to 16 aces.

Djokovic’s returns are as good as anyone’s ever. His two-handed backhand is such a threat. His ability to anticipate shots from the other side of the net and track them down frustrates opponents. A consummate baseline wizard, he can play at the net, too: Djokovic won 34 of the 48 points when he went forward Sunday, including going 7 for 9 when he serve-and-volleyed.

For all of that, though, maybe what sets him apart above all is a quality stats can't track.

When moments are most crucial, the tension and heart rate ratchet up. The mind and body can lock up. It’s simply human nature. Djokovic is somehow impervious to that sort of thing. Or at least plays as if he is.

Maybe it’s some enviable combination of grit and guts — to go along with all of his enviable talent and unrelenting hard work.

Let’s not forget that Djokovic faced two championship points against Federer in the 2019 Wimbledon final. Or that he trailed two sets to none in two matches at the French Open before coming back to win in five, including in the final.

So far, it has been a year of dominance by Djokovic, on top of a decade of successes.

“The last 10 years has been an incredible journey,” he said, “that is not stopping here.”