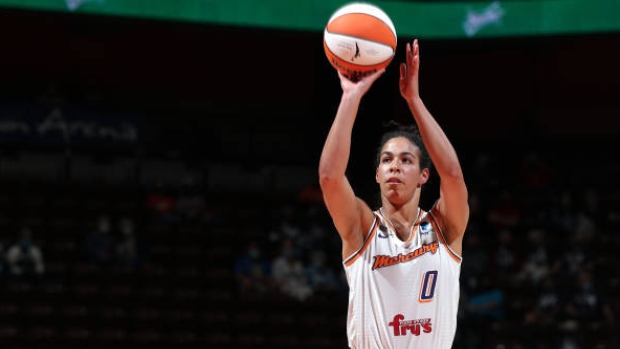 The WNBA’s race to the end of the regular season proved to be a furious fight to the finish, with the New York Liberty locking up the eighth and final playoff spot on the last day possible.

The Connecticut Sun and Las Vegas Aces are locked in as the No. 1 and No. 2 seeds and won’t play again until the semifinals. The Minnesota Lynx and the Seattle Storm, who finished the year third and fourth, will play in the second round against the winners of the first-round matchups.

TSN's coverage of the WNBA playoffs begins in the second round on Sunday, Sept. 26 and can be seen on TSN5, TSN Direct and the TSN App.

The first round of the playoffs features the No. 5 Phoenix Mercury taking on the No. 8 New York Liberty and the No. 6 Chicago Sky facing off against the No. 7 Dallas Wings.

Canadian Kia Nurse gets the opportunity to take on her former team in the Liberty.

Nurse was drafted by the Liberty with the 10th overall in 2018. She spent the first three seasons of her WNBA career in New York before being dealt to the Mercury on Feb. 10.

While it was a down season offensively for Nurse, it appears she is finding her game at the right time. With five double-digit scoring performances in her past seven games, Nurse, who started every game for the Mercury this season, saw a noticeable jump in her field goal and three-point shooting percentage this year.

Despite ending the season with three consecutive losses, the Mercury came out of the Olympic break as one of the hottest teams, ripping off 10 consecutive wins with their ‘Big Three’ leading the way.

Brittney Griner had an MVP-calibre regular season, averaging 20.5 points per game (second in the WNBA), 9.5 rebounds and 2.7 assists to go along with 1.9 blocks (first).

Diana Taurasi, who has missed time with injuries this season, averaged 15.2 PPG, 4.4 RPB and 4.9 APG. According to head coach Sandy Brondello, Taurasi is expected to play in Thursday’s game after missing the past four games with an ankle injury.

Clinching the last playoff spot with help thanks to wins from the Lynx and Wings, the Liberty are playoff-bound for the first time since 2017.

After a red-hot start to the season, the Liberty went just 2-9 in the second half coming out of the Olympic break, including a stretch of eight consecutive losses.

Betnijah Laney is undoubtedly New York’s MVP this season after she turned in another strong year, averaging 16.8 PPG, 4.1 rebounds and a career-high 5.2 assists.

The Liberty knew after last season, where they finished dead last at 2-20, that things needed a shakeup. Their moves to acquire Sami Whitcomb and Natasha Howard from the Storm have paid off well.

Whitcomb went from a bench player with Seattle to a starter in New York, setting career highs across the board in points (11.7), rebounds (5.0) and assists (2.7).

Howard only played in 13 regular-season games mainly due to injury, but when she did play, she was in double digits in scoring 11 times.

The X-factor for the Liberty in this game will be Sabrina Ionescu. Coming into the season with enormous expectations, she was on fire to start the season but cooled off offensively.

Ionescu didn’t quite live up to the expectation of being a superstar-level scorer this year, but she is currently on an 11-game double-digit scoring streak and ended the season third in the league in assists per game (6.1).

The Mercury won the season series 2-1 and despite their lull to end the season, Phoenix is the favourite here.

The Chicago Sky come into this game off an erratic regular season. On one hand, this is a team that pulled off a seven-game winning streak earlier in the year. But the Sky also struggled at times to put two wins together and looked like both a contender and a pretender at times in 2021.

When the Sky signed two-time WNBA MVP Candace Parker in the off-season, it was with the expectation that she was the missing ingredient to push the team forward after two disappointing playoff exits in a row.

For a team that boasts Parker, Courtney Vandersloot, Allie Quigley, Kahleah Copper, Diamond DeShields and Stefanie Dolson, it’s puzzling why they haven’t been able to consistently play dominant basketball. The Sky have shown they are capable of doing so, such as in their 107-75 win over the Storm on Aug. 29.

The Wings are back in the playoffs after missing the postseason the past two years.

The team is led once again by Arike Ogunbowale, who continues to be Dallas’ biggest offensive weapon with her 18.7 PPG and 3.3 APG. She had more help this year, with Marina Mabrey turning in a season worthy of a Most Improved Player nomination with career highs in points (13.3), rebounds (3.9) and assists (2.9).

This matchup is primed for an upset. On paper, the Sky are the deeper, more talented squad but their inconsistency and 6-10 home record keep them from being an outright favourite.

The Wings carry a different set of expectations as the younger squad transitioning their way out of the rebuilding stage. While they’ve had their share of growing pains this season, they could surprise.

Dallas also recent history on their side heading into this game, having won the regular season series against the Sky 3-1.