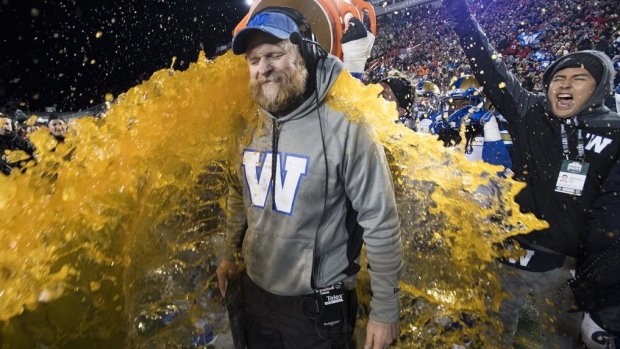 WINNIPEG — It sounds like Mike O'Shea is staying put.

The head coach of the Winnipeg Blue Bombers said Friday it's a "pretty high" percentage that he'll sign his name to another contract with the newly minted Grey Cup champions.

"We had a good chat this morning and we'll continue that," O'Shea told reporters about a meeting he had with Bombers general manager Kyle Walters.

O'Shea capped off his sixth season at the helm with a 33-12 Grey Cup victory over the favoured Hamilton Tiger-Cats last Sunday that ended the CFL club's 28-season championship drought.

"It's been a great journey, being a part of this," he said. "It has taken longer than I thought, but it's neat to be a part of building something, so I do like it here."

The 49-year-old from North Bay, Ont., has compiled a 56-52-0 regular-season record, with four straight years of playoff appearances. Winnipeg (11-7) finished third in the West Division this season.

When asked if he'd thought about moving on to a new challenge – the B.C. Lions, Edmonton Eskimos and Ottawa Redblacks are each looking for a head coach – O'Shea replied he hadn't.

"We're trying to get exit meetings done with the players who are still here so I'm not too concerned with what's going on around the league," he said.

One thing he's aware of is the interest teams have in talking to Bombers offensive co-ordinator/receivers coach Paul LaPolice about those head-coaching vacancies.

"And he should," O'Shea said, referring to LaPolice's opportunities. "He's been excellent. He's managed to move game plans around and use the talent of the roster to the best of his abilities, put guys in great positions to allow us to win games and be very successful through the playoff run and the Grey Cup."

Multiple reports have said the Lions, Eskimos and Redblacks have asked the Bombers for permission to speak to LaPolice.

LaPolice, 49, is in his third stint with the Bombers. He first joined the club in 2002 as offensive co-ordinator, returned as head coach from 2010-12 and came back in 2016 to guide the offence again. He's also been an assistant with Saskatchewan, Toronto and Hamilton.

That's not the only outside interest in Winnipeg's staff.

The Montreal Alouettes have reportedly asked permission to talk to both Bombers assistant GM/director of U.S. scouting Danny McManus and director of college scouting Ryan Rigmaiden about that club's GM opening.

"You're drawn naturally to champions," O'Shea said. "There's a reason why we've had success and that's because there's a lot of people working very hard to do their jobs to make sure they make this a better place. One of the names, (assistant GM) Ted Goveia, should be in that conversation, too."

All three played a role in the team's success, particularly after Nichols suffered a season-ending shoulder injury in mid-August that required surgery. Sophomore Streveler took over the reins and then Collaros was picked up from Toronto at the Oct. 9 trade deadline.

Collaros's veteran savvy and strong arm, combined with Streveler's gutsy running abilities even while dinged up, propelled the offence with a one-two attack during the playoffs.

The reality is the trio won't be together next season, O'Shea predicted.

"You do remember the fact that they all want to be starters, so I think in any situation when you've got that many guys that are able to start sitting in a room, that someone's gonna go find another job somewhere," he said.

Streveler skyrocketed as a fan favourite after the city held a parade Tuesday to celebrate the Grey Cup title. Streveler wore a cowboy hat, shorts, a fur coat with no shirt and chugged beer and liquor handed to him by fans. Nichols got on stage after the parade and shouted his love for the fans, including dropping some curse words.

O'Shea was asked what he thought of the players' unique enjoyment of the moment, and drew laughter with his response.

"They work so damn hard, they can do whatever they want in my mind," O'Shea said. "I wish I wore a fur coat and didn't have a shirt on either and was chugging beers, too."