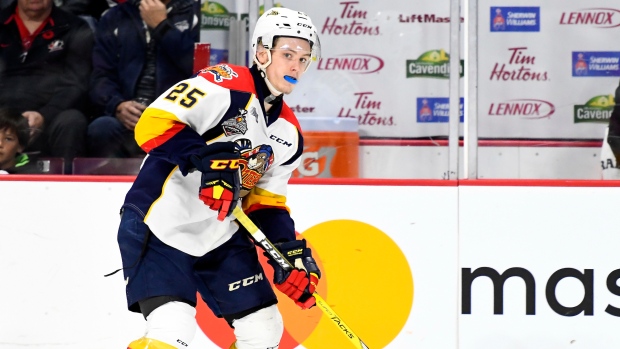 TJ Fergus of the Erie Otters in Game 2 of the 2017 MasterCard Memorial Cup , Aaron Bell/CHL Images

The Ontario Hockey League and Erie Otters are asking an Ontario court to dismiss a $1-million lawsuit filed by defenseman T.J. Fergus, the son of former NHL player Tom Fergus, who alleges that an Otters’ team trainer advised him during the 2016-17 playoffs to wait until he returned home to Canada following the season to seek treatment for blurred vision in his left eye.

While the defendants in the case allege it was Fergus’s parents, Tom and Judy, who recommended deferring treatment until after the season, Fergus alleges he relied on the team’s advice to postpone treatment.

Delaying medical attention worsened his condition and left him with potentially permanent damage to his eye, Fergus alleges.

“The plaintiff states that he relied on the defendants’ advice to postpone treatment, which directly contributed to the advancement of his medical condition, which could have otherwise been avoided,” says a statement of claim filed on June 27 in Ontario Superior Court.

Fergus has asked a court to award him $1 million for “a loss of income, a loss of competitive advantage in the employment field and a loss of income earning capacity.” A trial date has not yet been set in the case. Court records indicate that the case is scheduled to be decided by a judge, not a jury.

A lawyer representing the Otters declined to comment. Neither OHL commissioner David Branch nor Fergus's agent Jeff Jackson responded to requests for comment.

"We have nothing to say," Falconeri wrote in an email to TSN.

Fergus underwent surgery at St. Michael’s Hospital in Toronto in June 2017 to repair a detached retina, the claim alleges. In a follow-up appointment in September 2017, an ophthalmological surgeon measured the vision in Fergus’s left eye at 20/150, meaning that he could see clearly an object at 20 feet where others with normal vision could see at 150 feet.

“The surgeon informed [Fergus] that his retina had been reattached but continued to be weak and if his left eye vision did not begin to improve shortly, the damage would be permanent,” his claim says. “To date, his vision has not improved.”

Two months after his surgery, Fergus’s mother, Judy Fergus, on Aug. 18, 2017, signed a document certifying that T.J. had been certified by their family doctor to play in the OHL, the defendants say.

Fergus, who is now 22, played three seasons with the Otters.

Following the 2016-17 season – during which he says he complained of vision problems and the Otters won the OHL Championship and played in the Memorial Cup – Fergus played the 2017-18 season in the OHL with Barrie and Hamilton. He appeared in 64 games that season and scored seven goals with 34 assists, both career highs. Fergus now plays at Acadia University.

Besides the Otters and the OHL, other named defendants are Otters trainer Andrew Kupniewski and “Dr. Doe,” an as of yet unidentified doctor in Pennsylvania.

“They wilfully and deliberately provided the plaintiff with incorrect advice pertaining to his injury, which when followed, resulted in the permanent loss of vision in his left eye,” Fergus’ claim says.

It accuses the yet-to-be-named doctor of being “incompetent.”

In a statement of defence filed Oct. 7, the defendants denied Fergus’s claims and asked the court to dismiss the case.

“Participation in high-level, competitive hockey at a major junior level involves inherent risk of injury, due to the speed and physical nature of the sport,” the defendants wrote. “These defendants were not in a special and proximate relationship with the plaintiff that would or could give rise to a fiduciary duty in the circumstances. In the specific circumstances of the relationship, there was no relationship of trust and confidence, and no power imbalance or vulnerability whereby these defendants had the ability to exercise power unilaterally so as to affect the interests of the plaintiff. Also, Kupniewski is not a medical doctor and was not in a physician-patient relationship with the plaintiff. Rather, Kupniewski tended to the plaintiff in his capacity as a hockey trainer.”

The defendants wrote that Fergus first reported his blurred vision to Kupniewski on May 11, 2017 following a team practice.

“The plaintiff referred to blurred vision but denied being hit at the practice or that the issue was due to other sustained trauma,” the defendants wrote. “The plaintiff agreed to monitor the condition. At the time the club was engaged in the final playoff round of the OHL championship, a five game series with the Mississauga Steelheads (With the games to that time having been played on May 4, 7, 8 and 10, 2017.) The plaintiff reported no vision issues during or after those games. The fifth and final playoff game was on May 12, 2017, in Erie, with the club winning the OHL championship.”

Fergus played a regular shift during the final game and also played during the Memorial Cup in Windsor.

“The club was assigned a permanent doctor for the tournament,” the defendants wrote. “No vision complaint was made by the plaintiff to the said doctor, to club officials or to Kupniewski.”
Two days after the final Memorial Cup game, on May 30, 2017, Fergus signed an exit physical form in respect of the 2016-17 season, the defendants wrote.

“The plaintiff attested that “[currently], I am not suffering from any injury, illness or medical condition requiring further attention,” the statement of defence says. “He specifically did not request to be evaluated by a team physician before returning home.”

The defendants also alleged that Fergus traveled to and from Mexico from June 1 to June 9, 2017, “where he engaged in boisterous and rough activities. Any injuries of which the plaintiff now complains were caused by, or alternatively contributed to by, that conduct… or other non-club activities in which the plaintiff was involved.”

Fergus’s medical, health and insurance documents and his communications including with "his friends, teammates and family (by correspondence, text, email and social media), do not disclose any ongoing vision issues,” the defendants wrote.