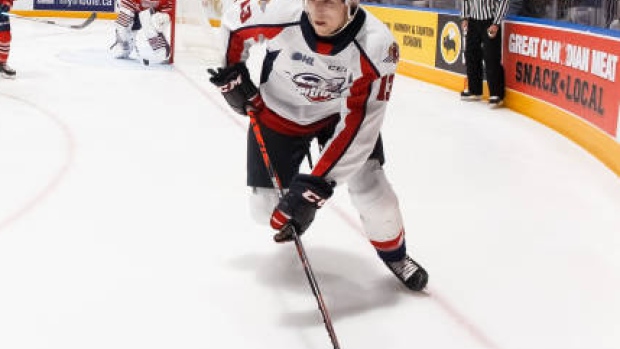 SAULT STE. MARIE, Ont. — Will Cuylle and Ethan Miedema each scored twice and six other Windsor players found the back of the net as the Spitfires routed the Soo Greyhounds 10-4 Sunday in a battle of the OHL West Division's top two teams.

Wyatt Johnston and Matthew Maggio had a goal and three assists apiece, while James Jodoin, Michael Renwick, Ryan Abraham and Avval Baisov all scored for Windsor (16-9-4) for the team's eighth win in its last 10 games.

Louka Henault chipped in with three assists and Cuylle had two helpers for the four-point game.

Spitfires starting goaltender Mathias Onuska gave up three goals on 11 shots in the first 15:34 of the first period before being pulled. Xavier Medina stopped 18 shots in relief.

Goalie Tucker Tynan was beaten five times on 15 shots. He was puled in the second period for Samuel Ivanov, who stopped 16-of-21 shots.

The Spitfires broke a 3-3 tie by scoring six unanswered goals – three in the second period and another three in the third.

MISSISSAUGA, Ont. – James Hardie scored twice and assisted another for Mississauga (21-7-3), which has not lost in regulation in seven straight games. Roman Basran made 28 saves in the win. J.R. Avon and Joe Carroll scored for Peterborough (10-16-2).

OWEN SOUND, Ont. – Ethan Cardwell had two goals and Brandt Clarke provided three assists as Barrie (15-7-3) returned to its winning ways after its six-game win streak was snapped Saturday. Deni Goure had a goal and two assists for Owen Sound (12-11-3).

KITCHENER, Ont. – Antonio Stranges led the way on offence with two goals and two assists, and Logan Mailloux scored his first two OHL goals in the third period for London (19-8-1). The Knights have won two in a row. Pavel Cajan stopped 31-of-37 shots in defeat for Kitchener (13-14-2).

OSHAWA, Ont. – Ty Tullio's two goals and one assist propelled Oshawa (14-11-3) to its fifth win over the past six games. Jack Thompson and David Goyette replied for Sudbury (8-18-3).