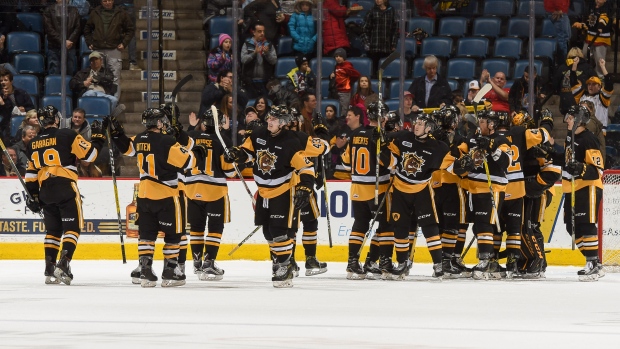 The Ontario Hockey League will have to try to remove physical contact, including bodychecking, if it's to have a 2020-21 season.

Lisa MacLeod, Ontario's minister of Heritage, Sport, Tourism and Culture Industries, spoke with media on Wednesday, where she addressed a variety of issues facing sports in the province during the COVID-19 pandemic. One of her most pressing concerns is the OHL's return-to-play plan, which she said is currently targeting an early December start date.

However, MacLeod said steps have to be taken by the OHL — or any sporting organization in the province — to slow the spread of COVID-19, including removing close physical contact among players.

"It would be safe to say that body contact, unless it's incremental, will not be permitted as a result of COVID-19," said MacLeod. "That would pose a challenge in terms of how they amend their play."

Premier Doug Ford's government has put a four-week pause on any new reopening plans, including sports organizations like the OHL. MacLeod said that her ministry and the OHL are "in constant contact" as they try to come up with a reopening plan for the 20-team league.

"We work incredibly well with them, (OHL commissioner) David Branch is a part of our ministerial advisory committee as well, so they're well aware of the health crisis that we find ourselves in in the second wave," said MacLeod.

The OHL said in a statement that will not comment on its ongoing negotiations with the Ontario government.

There are other stumbling blocks for the OHL's return to play.

Three of its teams are in the United States — Flint (Mich.) Firebirds, Saginaw (Mich.) Spirit, and Erie (Pa.) Otters — and having them cross the border would be a matter for Canada's federal government to address.

Further, two of its teams — the Ottawa 67's and Mississauga Steelheads — are in "hot zone" parts of Ontario, where the second wave is at its worse. On Wednesday, Health Minister Christine Elliott announced 173 new cases in Toronto, 121 in Ottawa, 75 in York Region, and 70 in Peel Region.

MacLeod said that the OHL is not interested in doing a self-contained bubble, like the NHL, NBA, and WNBA did to complete their 2019-20 seasons.

"I know, right now, that those options are not the preferred route," said MacLeod. "They have provided us with a robust return-to-play proposal for our consideration.

"I think that their hope would be not to be in a bubble or tournament situation."

Minor hockey associations in Ontario have a planned restart this month without bodychecking, fighting, or faceoffs. Teams must also be kept in 50-player bubbles, with play limited to 3-on-3 or 4-on-4 to help skaters remain physically distant on the bench.

The Greater Toronto Hockey League, Canada's largest minor hockey association, announced over the weekend that it would not be playing until January.

MacLeod also spoke about return-to-play plans for other sports including the Canadian Football League, Major League Soccer, and Canadian Premier League. She said an announcement on the government's plans to bid on hosting FIFA World Cup games and the Commonwealth Games in Hamilton will be made on Oct. 30.

She said that extra money has been earmarked for provincial sport organizations to help them recover from the COVID-19 pandemic and that funding details will be released at a later date.