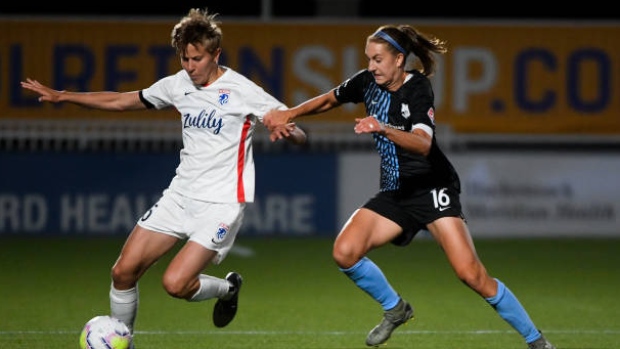 Sky Blue goalkeeper Kailen Sheridan leapt to stop Jasmyne Spencer’s breakaway attempt in the 85th minute, preserving the draw in the tournament opener for both teams.

The Reign are playing the Challenge Cup without Megan Rapinoe, who opted out of the tournament. Sky Blue is without national team players Carli Lloyd and Mallory Pugh because of injuries.

The National Women's Soccer League is the first professional team sport in the United States to resume amid the coronavirus pandemic.

The Reign had a good chance in the 57th minute when Darian Jenkins' header off a feed from Bethany Balcer went just wide of the left post.

Sky Blue's Elizabeth Eddy got a good look in the 71st minute that was scooped up by Reign goalkeeper Casey Murphy.

There were big changes for the Reign in the off-season. They were purchased by OL Groupe, the parent company of French powerhouse Olympique Lyonnais, in December.

In January, the team named Farid Benstiti coach to replace Vlatko Andonovski, who became the head coach of the U.S. national team.

The Utah Royals played to a 3-3 draw with the Houston Dash in the earlier game Tuesday. The eight teams playing in the tournament will play four group games to determine seeding for the quarterfinals.

Nearly all the players on both teams took a knee when the national anthem played before the game. The majority of the NWSL's players have been kneeling during the anthem. Additionally, players have worn Black Lives Matter T-shirts during warmups and observed a moment of silence before each kickoff.

The league's ninth team, the Orlando Pride, had to withdraw from the Challenge Cup after a number of players and staff members tested positive for COVID-19.

This story has been corrected to show that Lloyd's first name is spelled Carli, not Carly.