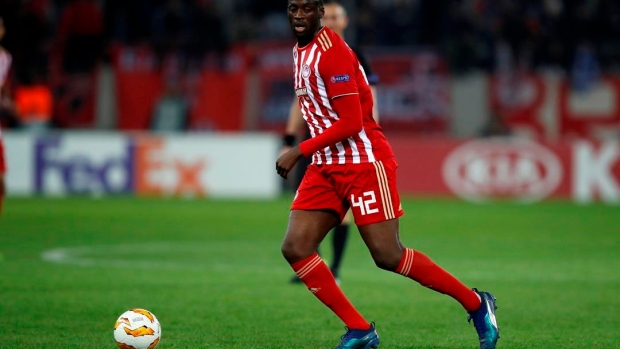 ATHENS, Greece — Youssef El Arabi scored a late penalty Wednesday to give Olympiakos a 1-0 win over Red Star Belgrade in the Champions League and clinch third place in Group B. The Greek team finally broke the deadlock in the 88th minute after Red Star substitute Jander carelessly handled the ball. Both teams had already been eliminated, with only a place in the Europa League knockout stages at stake.

Playing in torrential rain at Karaiskakis Stadium, Olympiakos worked hard to create openings for their strikers but were held back for most of the game by standout goalkeeping from Milan Borjan. The Canada international stopped a shot on target from Guilherme in the 53rd minute, and his quick reflexes denied Daniel Podence in the goalmouth 10 minutes later. “We tried everything tonight," Olympiakos winger Giorgos Masouras said. "We never like to say that the ball won't go in when playing any game. But it eventually did and I think the result was fair.”Tomane missed a penalty just before halftime for Red Star after Guilherme brought down Marko Marin with a clumsy tackle.Vladan Milojevic, the Red Star coach who was a veteran of the Greek leagues as a coach and player, said he had no complaints after finishing last in a group that included Bayern Munich and Tottenham."Our journey in Europe is over. My players? I am proud of them," Milojevic said. "We countered Olympiakos effectively but in the end, the game was decided on two penalties."