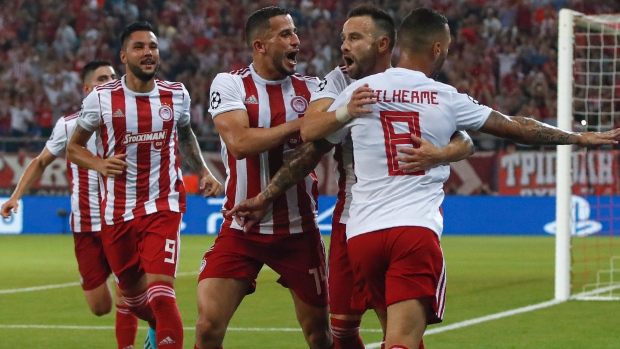 ATHENS, Greece — If Tottenham wants to repeat its run to the Champions League final, coach Mauricio Pochettino knows his players have to learn a lesson from Wednesday's group opener.

Tottenham gave up a two-goal lead and had to settle for a 2-2 draw against Olympiakos in a disappointing start to its European campaign.

Harry Kane scored a clinical penalty in the 26th minute after being carelessly brought down by Yassine Meriah, and Lucas Moura made it 2-0 four minutes later with a strike from 20 metres (yards). But the Greek side was level early in the second half.

"I think, to be honest, that we didn't deserve to go 2-0 up since we hadn't found a way to stop them," Pochettino said. "What disappointed me is that we didn't manage that 2-0 (advantage) property ... I think our performance wasn't the best."

Spurs thrashed Crystal Palace 4-0 at the weekend, but Pochettino said his team couldn't reach the same level in Greece.

"They didn't show the same aggression and focus and we conceded too many chances," he said.

Olympiakos winger Daniel Podence troubled the visitors all evening, testing goalkeeper Hugo Lloris early and later setting up Miguel Angel Guerrero who hit the bar with a low strike. But Podence finally found the net before the break after exchanging passes with Mathieu Valbuena, who then levelled from the penalty spot in the 54th minute.

"We got ourselves in a great position but obviously, the goal before the first half changed the momentum," Kane said. (Getting) two goals away from home that's not bad, but overall we're disappointed because this is the kind of game we'd want to be winning."

Tottenham, which lost the Champions League final to Liverpool last season, brought on Son Heung-min for the last 17 minutes but the South Korean produced little threat on the left.

Olympiakos returned to the Champions League after a year's absence but sorely missed striker Kostas Fortounis, out with a knee injury, and defender Pape Abou Cisse who has influenza.

But Ruben Semedo returned to fitness and paid tribute to his teammates.

"Every player wants to be in the Champions League, and so do I. So we spare no effort and that worked for us," he said. "I think the result was fair for us and it came from very hard work."

Coach Pedro Martins said his club remains the outsider in a group that also includes Bayern and Red Star Belgrade.

"There are two favourites in this group and that hasn't changed," Martins said. "But we are Olympiakos and we have a mentality of wanting more. We showed heart tonight and character. There are not many teams that can back from a 2-0 deficit to Tottenham."