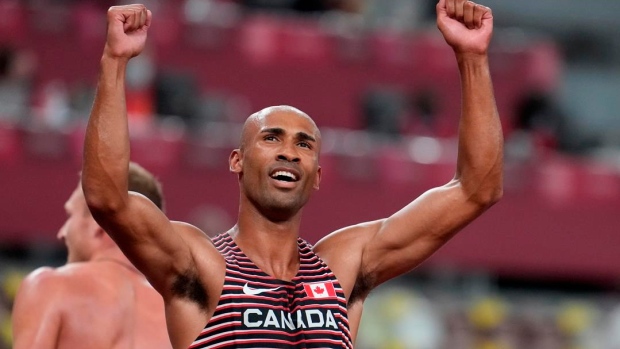 VANCOUVER — Even Canada's top athlete has to change diapers.

Decathlete Damian Warner has become a recognizable face since winning gold at the Tokyo Olympics last summer, but the 32-year-old said he's still the dad and partner he was before the Games — and he does the same domestic chores.

"I'm still the same me, I still do the same things. I still change diapers, I still take out the garbage and do the dishes," said Warner, who has a 15-month-old son named Theo with partner Jen Cotten.

"There's certainly a lot of things in my life that has changed but I'm happy that it's for the most part stayed similar because I know I really enjoy my life," he added. "I enjoy the people that I have in my life and I get to be an athlete, I get to travel the world and compete against some of the best people. So I have nothing to complain about at the end of the day."

Warner, who hails from London, Ont., has been off to a strong start this season, taking first place in heptathlon at the world athletics indoor championships in Belgrade, Serbia, in March and winning gold in decathlon at the 2022 Hypo Meeting Gotzis in Austria last month.

On Tuesday, he'll compete in the 110-metre men's hurdles and the men's long jump at the Harry Jerome Classic in Burnaby, B.C.

The meet is an opportunity to test himself against a really good field, Warner said.

"I try to take what I learn from these individual events back to the decathlon, so I can try to be the best that I can be," he said. "And these are always great opportunities to practice and opportunities to win and to lose and to learn."

The meet is also an opportunity to warm up for the Canadian Track and Field Championships, taking place in Langley, B.C., later this month, and the World Athletics Championships in Eugene, Ore., in July.

While he's headlining Tuesday's competition, Warner said he's not feeling an extra pressure coming in as an Olympic champion.

Winning gold in Tokyo — and becoming just the fourth decathlete in history to top the elusive 9,000-point barrier — has actually removed some strain from competing, he said.

"If my career was to end tomorrow, I would be able to say I'm proud of what happened," he said. "Obviously, I don't expect my career to end any time soon, knock on wood. But I've put myself in a position where I can be proud of what I've been able to achieve. And now every competition that I go to, it's 'Can I win?' and 'How far can I push this scoring?'"

Madeleine Kelly knows the freedom of running without pressure firsthand.

The 26-year-old has accomplished two major goals over the last year: competing in the Olympics and running a sub-two-minute 800-metre race.

"The Olympic year was stressful. A lot of a lot of people found it hard. The pandemic added an extra layer to that and I think I just spent so much time last summer living and dying by every results," said Kelly, who finished 31st in the women's 800m in Tokyo.

She came into this season looking to get back to enjoying running — a mindset that seems to be paying off early. Kelly posted a time of one minute 59.83 seconds in the 800m at a competition in California last month.

It's a result she'll look to build on at the Harry Jerome Classic on Tuesday where she'll the 800m run alongside her Olympic teammate and friend Lucia Stafford.

Remembering to relax will be key, Kelly said.

"It's a psychological state of mind, but it has a physical response as well," she said. "So it's just finding that fine line between being relaxed, but still being invested enough that you can put yourself in a place to succeed."

This report by The Canadian Press was first published June 13, 2022.