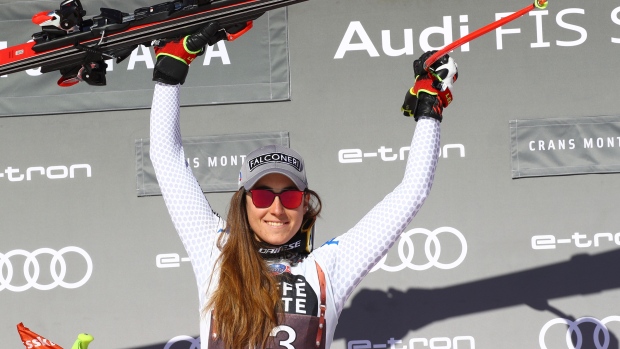 "Despite the fact that the results were not displayed accurately in the finish area or on television, a manual backup timing system was used for the athletes that were affected as per FIS rules," the governing body said in a statement.

Goggia was unaffected by the bad timing which caused confusion for the two best Swiss racers immediately behind her, Joana Haehlen and Lara Gut-Behrami.

The Italian racer was rewarded for taking an aggressively direct racing line typical of Vonn, the American star who retired after winning downhill bronze in the world championships two weeks ago at Are, Sweden.

Gut-Behrami was third, 0.45 behind Goggia, having originally been placed fourth. The Swiss Timing race operation is run by Longines, which has long sponsored Alpine ski greats Mikaela Shiffrin and Aksel Lund Svindal.

"Longines and Swiss Timing are very disappointed by this incident and wish to apologize to the athletes, organizers and spectators," FIS said.

Haehlen and Gut-Behrami were among three Swiss in the first 12 starters who came into the finish area unsure where they stood because the clock kept running after the trio crossed the line.

"The problem was due to connection issues between the infrastructure installed on the finish line and the timekeeping room," FIS said.

The race was interrupted each time to repair the timing system and calculate each racer's time. Haehlen and Gut-Behrami were at first given times which were later made one-tenth of a second faster in the official result.

Despite being moved down to fourth from third by Gut's revised time, Nicole Schmidhofer extended her lead in the downhill standings.

The result had little impact on the overall World Cup standings with runaway leader Shiffrin skipping two weekends of races, in Switzerland and Russia, to rest after the world championships.

Goggia won the season-long downhill title last year, but was sidelined this season by an ankle injury until returning one month ago.

Her first downhill win since the gold-medal run at the Pyeongchang Winter Games was the fourth of her World Cup career in the fastest discipline. Vonn counted 43 downhills in her women's record 82 World Cup race wins.

Stuhec, who retained her world title, lost balance landing a jump and was twisted in midair then slid into safety nets. She seemed to avoid serious injury and skied down to the finish area.

A helicopter carried Tiffany Gauthier from the course after the French racer appeared to injure her left knee before skiing to a stop.

The two interruptions for crashes bookended the three timing delays that provoked some jeers from home fans.

"It's a bit bizarre, to arrive and there's not a time," said Gut-Behrami, who watched the next starter Goggia edge her off a podium finish she later regained.

An Alpine combined event is scheduled Sunday at Crans-Montana, which is a candidate to host the 2025 worlds.