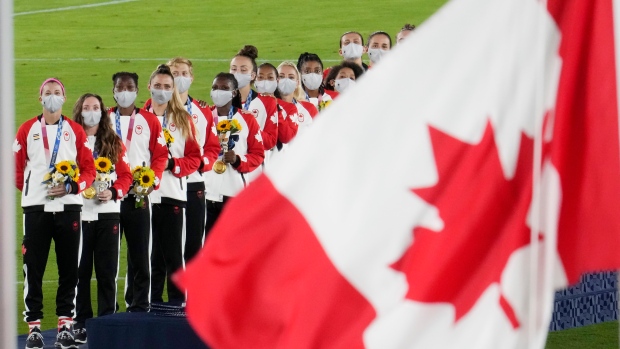 For many, the attention turns to creating a domestic league for Canadian women or, at the very least, forming a Canadian expansion club that would compete in the U.S.-based National Women’s Soccer League.

Canada Soccer president Dr. Nick Bontis said last year that one of his goals was to bring an NWSL team north of the border. Currently, the league has 10 teams based in the United States, with two more clubs in Los Angeles and San Diego set to join in 2022.

“I’m willing to say I’ll work my butt off to get an NWSL team in Canada,” Bontis said last fall.

On Tuesday, Bontis said the goal remains the same, with an added bonus: an Olympic gold.

“All I can say is that the gold medal was perfect,” he said. “That’s what we needed – an inciting action to get past what COVID did to us in the pandemic, to now create a resurgence for investors to realize the return on investment they can get out of women’s soccer.

Canada, currently ranked eighth in the world, remains the only top-10 team to not have its own women’s domestic league.

On the men’s side, there is the Canadian Premier League, which is in its third season, and three teams in Toronto, Montreal, and Vancouver compete in MLS.

“It’s time for that to change,” said captain Christine Sinclair. “We’re hoping that this platform will give us the opportunity to start that change… The youngsters, they deserve to be able to go watch their heroes on a week-to-week basis and not just once every four years.”

“Personally, I think this should have happened yesterday. That’s what I believe,” said Bontis. “This should have happened after 2012, is what I believe. This is a journey, a complex ask. Our job at Canada Soccer with our athletes is to attract the investors necessary to mount the types of investments that are necessary to launch, whether it’s a club, whether it’s a league.”

Bontis also cited the difficulties of the COVID-19 pandemic. During its second season, the Canadian Premier League had to reduce its season to a tournament based in Prince Edward Island, dubbed The Island Games.

“There are challenges in this country because it’s a very, very large country. We also have something called COVID that didn’t help the situation for the last year and a half,” Bontis said.

Players currently on the national team play professionally in the NWSL, or go oversees to play in European leagues, such as those in France and England.

“It’s such a small number that make the national team,” said Sinclair, who plays for the Portland Thorns in the NWSL. “But that doesn’t mean that kids shouldn’t be able to follow their dreams just because they don’t make the national team. There should be somewhere they can continue to play the sport they love.”

For the players that just won gold – defeating Sweden 3-2 in penalty kicks last Friday after playing to a 1-1 draw in regulation and extra time – there remains a sense of optimism.

Leon grew up in Maple and King City, Ont., and said she would love the opportunity to come home and play for a club in Toronto.

“I think as players we’re very honest with that. We feel the support from Canada Soccer as well on that front,” she said.

Ashley Lawrence, who plays for Paris Saint-Germain in France, echoed Leon’s sentiment about the chance to play at home.

“I think it would mean everything. It’s kind of a long time coming,” she said. “I know that it is in the works. Just getting this gold medal, hopefully it’s helping to build momentum and push that forward. I know Canada Soccer’s doing an amazing job at that.”

Lawrence added that a domestic club or league would help pave the way not only for the current generation, but also for the next wave of players.

“The more that those [domestic leagues] are set in place, I think it’s better for the growth of the game, but especially in Canada,” she said.

When asked what she thinks should happen next, Sinclair said that she’s no expert, but believes the next logical step would be to bring an NWSL franchise to Canada.

Bontis said Canada Soccer remains committed to not only bringing a professional team or league to Canada, but to help develop the game at the grassroots level.

“I’m very excited and I’m honoured and privileged to help lead a team of individuals that’s going to help to make this happen,” he said.