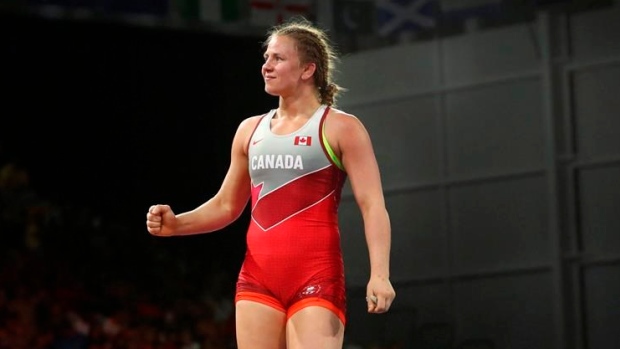 Erica Wiebe says her path to becoming an Olympic champion wrestler has taught her how to roll with the punches. She's using that mindset to prepare for a Tokyo Olympics that will look much different than what she originally anticipated.

Wiebe was one of four wrestlers nominated to Canada's Olympic team Wednesday, along with Danielle Lappage, Amar Dhesi and Jordan Steen.

Wiebe, who won gold in the women's 75-kilogram event in her Olympic debut at the 2016 Rio Games, said she has had to adjust her expectations of what the environment will be like when she goes for a second gold in Tokyo.

The 2020 Games were pushed back a year due to the COVID-19 pandemic, and restrictions in Japan mean fans outside the country will not be able to attend the Games.

"I was preparing to compete in a stadium environment that would be incredibly loud," she said in an interview Wednesday.

"There's so much known about the voraciousness of Japanese fans, and women's wrestling in particular is a huge sport in Japan. So I was kind of going into it preparing for that. And we're not sure what the stadium environment is going to look like, but my friends and family will not be there."

Wiebe also said the athletes village will be "a much more muted experience" compared to Rio. But she said the unpredictable life as an elite wrestler has prepared her for whatever awaits.

"I'm so used to rolling with the punches and the sport of wrestling in and of itself is you have to be adaptable," said Wiebe, who will compete in the 76-kg event in Tokyo. "You have to be flexible on changing times and changing venues, changing everything. And so I feel like I've been prepared for this."

Much of Japan, including Tokyo, is under a state of emergency due to a spike in COVID-19 cases. Only about one to two per cent of the population is fully vaccinated, and opposition to the Olympics is running at 60-80 per cent in numerous polls.

Wiebe said it has been hard to see the recent criticism of the Olympic movement.

"It's really tough. I don't know what the right answer is but I do believe there can often be distortions in the way that it's perceived and shared through the media," Wiebe said.

"I'm confident the Games can be held safely, and should be held, because sport has the power to show us that when we come together we can be stronger, we can unite and we can inspire," she said.

Lappage, from Olds, Alta., was nominated for the women's 68-kilogram event. Lappage also made her Olympic debut in Rio but suffered a ruptured hamstring before her opening match.

Lappage, who now lives in Calgary, returned to competition in 2018 and won a silver medal that year at the world championships in Budapest.

"Being her training partner, her supporter and her travel companion, I know I wouldn't be here today of it wasn't for her," Wiebe said of Lappage. "Her positivity, her intensity ... so for me if she's able to have a performance in Tokyo, that is the ultimate win."

Wiebe competed with Dhesi in Belgrade, Serbia at the Individual World Cup in December.

Steen comes to the Olympics from the Montreal-YMHA Wrestling Club where he trains under the tutelage of former Olympians Guivi Sissaouri and Martine Dugrenier.