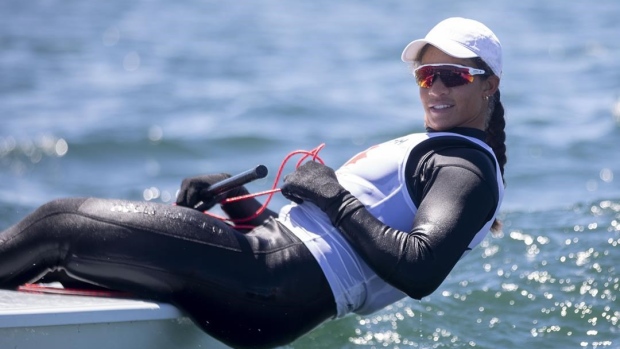 Disgusted with second place at youth nationals just over a decade ago, a teenage Sarah Douglas docked her boat.

"I loved sailing and I loved competing, but part of what I loved was I loved to win," Douglas told The Canadian Press. "It turned into, 'I love to win and hate to lose.'

"To me … that second place was more of a heartbreak. I was done with sailing at that point. I packed up and said, 'Dad, that's it. I'm going to volleyball camp next summer. I'm done with sailing.'"

"She was talking about the journey, the experience and what it was like to win a medal for Canada and that whole Olympic moment," Douglas recalled. "I was sitting there in the audience thinking, 'What am I doing? This is what I want to do. I want to win an Olympic medal.'

"That weekend I contacted the provincial team, the national team and said 'OK, what's my path here and how do I get back to training?'"

The 27-year-old from Toronto makes her Olympic debut Sunday at noon (late Saturday night in Canada).

She'll race women's laser radial in Tokyo's Enoshima Yacht Harbour over multiple days until Aug. 1, when the medals are awarded.

A Canadian sailor has never won an Olympic gold medal. Canadians have won three silver and six bronze in the history of the Summer Games.

"I had a crazy summer in that I had three back-to-back events. Two were in Japan and the one in the middle was in Peru," Douglas recalled.

"I arrived in Peru sick.... I would lie in bed, get ready for sailing, go get a meal, go sailing for two or three hours and then go back to bed. I didn't get healthy until the last couple days of competition, so I was still competing under the weather, and Peru had pretty strenuous weather patterns.

"It was quite challenging as an athlete."

Douglas, who trains out of the Ashbridges Bay Yacht Club, was diagnosed with the genetic blood disorder alpha thalassemia at age 14.

She has smaller and fewer red blood cells to carry oxygen, which she said "obviously as an Olympic athlete has its challenges."

"The main thing I struggle with is just balancing my energy and making sure I'm keeping healthy and managing my training levels," she explained.

"I do take iron as a supplement to kind of mitigate that, but it doesn't do everything. It's really about balancing energy loads and keeping healthy."

Douglas, who was born in Burlington, Ont., is a dual citizen of Canada and Barbados. She grew up in Barbados until returning to Canada to attend boarding school at age 14.

Her older brother Greg is also an Olympic sailor. He represented Barbados in 2008 in Beijing and Canada in London in 2012. He placed 15th in the Finn class for Canada in 2012.

"Both of my parents are from Barbados and they moved to Canada for a job and that's essentially when I was born," Douglas explained.

"My family had never actually sailed until about 2000. We have no sports background whatsoever. I grew up in Barbados and luckily the ocean was pretty much right there in the backyard.

"My brother started it all. He went to camp in Canada one summer and was introduced to lake sailing. From there, my whole family joined and it changed our lives. We became very invested in the sport.

"The thing about sailing is we're out there on the water — whether it's an ocean or lake, that changes everywhere we go. We get a different aspect of the world and it changes every day. We're weather-dependent. I just like the variety we get as a sport."

Douglas is one of the few Canadian athletes to squeeze in an Olympic test event in Tokyo in 2019 before the COVID-19 pandemic. She placed seventh.

Her hardest pandemic adaptation was spending seven straight months outside Canada from October to May, both training in Florida and competing in Portugal.

"Usually ... I come home for two weeks and three weeks and recharge, but I just didn't have that option with the quarantine restrictions and travel restrictions in place," Douglas explained. "It forced me to be abroad.

"With that, I got the most training days I've ever had in my life. This year, I was on the water the most, but the time away from home certainly was the biggest challenge."

This report by The Canadian Press was first published July 20, 2021.