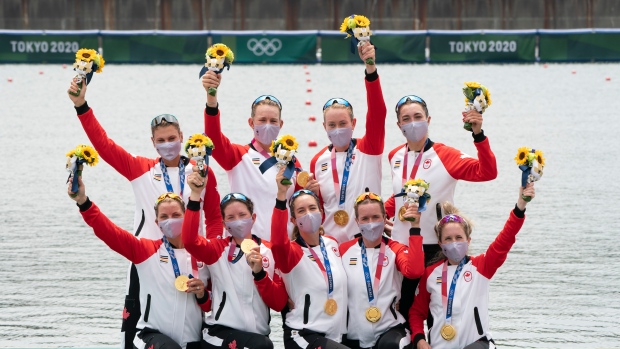 For the Canadian women's eight rowing crew in its final moments of preparation, however, it was a clear sign.

Kathleen Heddle, a legend in the sport and one of the country's most decorated Olympic athletes, died of cancer at age 55 in January.

The rumbles from above were taken by the group as an indication good fortune rested exactly 2,000 metres away.

"It was just a reminder that Kathleen was with us — and we're the storm and we're going to bring it," Susanne Grainger said. "We had a moment as a boat to remember her and make sure we brought the amazing grace and grit she rowed with into our race.

"We definitely had her on our minds."

So was putting in a jaw-dropping, podium-topping performance.

Canada led from start to finish at the Tokyo Olympics on Friday, racing to its first gold medal in the women's eight since the 1992 Barcelona Games when Heddle and current chef de mission Marnie McBean headlined a dominant crew.

Kristen Kit, the coxswain of this boat, said Heddle, along with coach and three-time world champion Michelle Darvill, were top of mind as the group churned towards its destiny at Sea Forest Waterway.

"I channel the spirit, and these are feisty group of women," Kit, a product of St. Catharines, Ont., said of nation's first Olympic rowing gold since the men's eight in Beijing some 13 years ago.

"They do not back down."

"We had some really tight races," said Roman, a native of Langley, B.C., and one of three remaining members of the women's eight that finished fifth at the Rio Games of 2016. "We knew if we laid down our best race we could probably win the gold medal."

The double-podium performance comes after Canada won just one medal — a silver in the lightweight women's double sculls — in Brazil five years ago.

Rowing Canada controversially scuttled its storied, headline-grabbing men's eight ahead those Games in favour of a men's four and men's quadruple sculls.

The idea was that splitting personnel and resources would double the country's chances at a medal and the subsequent cash from the government-funded Own The Podium program after receiving close to $17.5 million between the 2012 London Olympics and Rio.

But the plan failed spectacularly — the women, it should be said, didn't do much better — before a change in coaches and management for the four-year quadrennial heading into Toyko that eventually turned into five because of the COVID-19 pandemic.

"It's huge," Roman said of Friday's result. "We've worked so hard. I'm so grateful I got to be a part of this.

Canada wound up making two other finals at the Games.

Conlin McCabe of Brockville, Ont., and Kai Langerfeld of North Vancouver, B.C., just missed the podium with a fourth-place finish in the men's pair, while Jessica Sevick of Strathmore, Alta., and Gabrielle Smith of Unionville, Ont., were sixth in women's double sculls.

Canada's women have now won the national rowing program's last three Olympic medals, with the men having last climbed onto the podium in the eight back in 2012.

McCabe said the level of competition around the world has risen dramatically since he took silver with that crew in London.

"Canada's got to answer the call," he said Thursday. "That comes from having great leadership with a clear vision (which) could really help establish that for the great crop of young, up-and-coming rowers.

"We're super excited to see what they can do."

The women's eight was a boat filled with stories of perseverance given the extra year of hardship added because of the coronavirus.

And then there's Gruchalla-Wesierski, who was hit by a car while riding her bike six weeks ago and was very much in doubt to make the trip to Japan.

"It's unbelievable," said the Calgary product. "I was told I was lucky to be alive. And when they made the team announcements I was literally limping out of the hospital with a broken collar bone. I just can't believe I'm here.

"I fought back, not to go to the Olympics, but to compete for gold."

"Kathleen is a legend in Canadian rowing," Grainger said.

And now this women's eight can be added to that exclusive list.

This report by The Canadian Press was first published July 30, 2021.