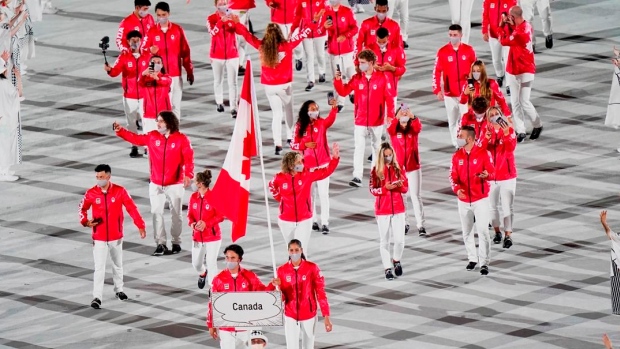 TOKYO — Success and safety are not mutually exclusive is the takeaway from Canada's performance in Tokyo's Olympics.

Canada's cautious approach to the COVID-19 pandemic made training and competing difficult for its Olympic hopefuls, but they seemed on board with putting public safety before their sports careers.

After almost a year and a half of pandemic pivots and adaptations, Canada tallied 24 medals in Tokyo.

That total was the most for Canada at a non-boycotted Summer Olympics. Canada amassed 44 in the boycotted 1984 Summer Games in Los Angeles.

Seven gold tied for the most at a non-boycotted Games with Barcelona in 1992. Canadians won 10 in Los Angeles.

"I think this is a message of hope of what we can achieve when we work together and when we listen to science," Canadian Olympic Committee president Tricia Smith said during the COC's virtual closing news conference Sunday morning in Tokyo.

"We've done a job here that represents hope for moving forward out of this virus."

Tokyo's Olympic Games were held in a state of emergency because of a coronavirus spike. The Paralympic Games open Aug. 24 and finish Sept. 5.

After Warner of London, Ont., was named Canada's flag-bearer for the closing ceremonies, Mitchell won the country's 24th medal and seventh gold at the Izu Velodrome.

Penny Oleksiak's seventh career swimming medal made her Canada's most decorated Olympic athlete of all time, with De Grasse close behind at six.

Toronto's Oleksiak swam the anchor leg for relay silver and bronze, and picked up an individual freestyle bronze to add to the four medals she earned in Rio.

De Grasse added 100-metre and relay bronze to his 200-metre victory. Mac Neil won the 100 butterfly, as well as relay silver and bronze for a complete set.

The new sport of women's sprint canoe was a boon for Canada with a pair of medals.

The air temperature was 34 degrees in Sapporo when Evan Dunfee of Richmond, B.C., surged for a bronze medal with his final strides in the men's 50k race walk, which will be dropped from the Olympic program in 2024.

Training facilities shuttered across Canada at the start of the pandemic were slow to re-open.

High-performance directors went begging to provincial governments for exemptions to train and hold domestic competitions in bubbles and controlled environments.

Canada's 14-day quarantine for travellers arriving from outside the country was a barrier to both training and competing. No athlete wanted to decondition for two weeks.

Staying home, or staying outside the country, for months was their reality.

"The road here was difficult. Canada was among the most restrictive and cautious countries throughout the pandemic," COC chief sport officer Eric Myles said.

"We were proud and supportive, and are still supportive of it, but it had a direct impact on the preparation of our athletes.

"Despite this reality, this team was ready and this exceptional group of athletes have certainly proven that."

Mission staff went above and beyond Tokyo's coronavirus measures with sanitation "at the hospital level" in Canada's quarters of the athletes' village, Myles said.

No Canadian athlete had tested positive for the virus as of Sunday, Smith said.

"One of our key goals was to come to Tokyo and to return to Canada COVID-free," COC chief executive officer David Shoemaker said.

"We've come this far with zero COVID cases among the 840 athletes, coaches, staff and volunteers in the Team Canada delegation."

Without international competition providing data points, no medal or ranking targets were set for Canada in Tokyo unlike Rio, where the stated objective of a top-12 ranking in total medals among countries was achieved.

This Canadian team also ranked in the top dozen, however, at No. 11 behind France.

"We saw there is a knife-edge difference between brilliance and breakdown. It takes bravery to believe in one when you know when you are risking the other."

Other Rio trends carried over to Tokyo.

Women won 16 of 22 medals in Rio, including the first dozen. In Tokyo, women generated the first 13 for 18 overall.

The swimmers again produced six medals, as did track and field, to mirror 2016.

There were near-misses with Canadians finishing fourth 10 times.

The quinquennial between Rio and Tokyo means less than three years of preparation for Paris 2024. That doesn't allow for much of a breather post-Tokyo.

Canada's first Indigenous Governor General Mary Simon, who was sworn in during the Olympic Games, commended the country's athletes in Tokyo.

"They have inspired us with their commitment to excellence and their resilience as they coped with many delays and challenges of the ongoing pandemic," Simon said in a statement.

"Over the past two weeks, we have seen athletes demonstrate at all levels the importance of physical and mental well-being, the interplay between body and mind. Our athletes have shown us that resilience, determination and self-care are vital components to success.

"As members of our large and diverse Canadian family, they have represented Canada with pride while also fostering greater connections with the global community, which is important for understanding each other and ourselves."