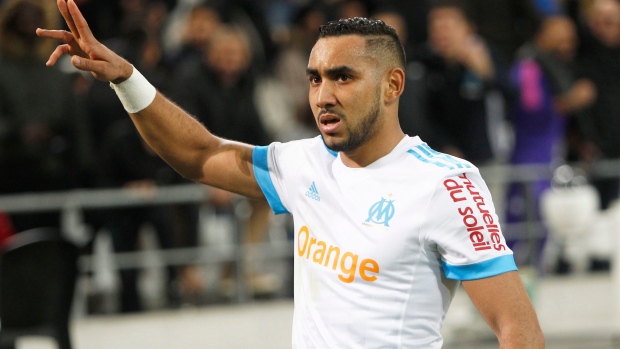 TOULOUSE, France — Second-half goals from Dario Benedetto and Nemanja Radonjic helped Marseille stay second in the French league after 14 rounds with a 2-0 win at 10-man Toulouse on Sunday.

Steven Moreira was sent off in the 42nd minute for a bad challenge on Bouna Sarr. The Toulouse defender was shown a yellow card at first but this was changed to red after referee Francois Letexier consulted video replays.

The visitors failed to break through until the 76th, when Dimitri Payet produced a perfectly weighted through ball for Benedetto’s sixth goal of the season.

A mistake from Issiaga Sylla gifted Marseille its second goal three minutes later. Sylla kicked the ball straight at an opponent and it fell kindly for Radonjic, who eluded a defender before firing inside the far post.

Marseille is eight points behind Paris Saint-Germain after 14 rounds, one clear of Anger and two ahead of Bordeaux.

Monaco forward Islam Slimani scored, conceded a penalty and was sent off in his team’s 2-1 defeat at Bordeaux.

Slimani scored a fine opening goal for the visitors in the 15th minute but gave away the penalty for blocking a free kick with his arm in the 67th.

Bordeaux’s Brazilian defender Pablo had already equalized with a header off a corner in the 29th, and Slimani earned a second yellow card for arguing with the referee after giving away the penalty. Nicolas de Préville converted the spot kick in the 69th.

Bordeaux ’keeper Benoit Costil made a fine save to deny Tiemoué Bakayoko an equalizer for Monaco, and Yassine Benrahou struck the post late for the home side.

Also, Montpellier put the brakes on Claude Puel’s impressive start as Saint-Étienne coach by holding the home side to a 0-0 draw.

Puel had already collected 13 points from a possible 15 for the best start made by a coach in the club's history.