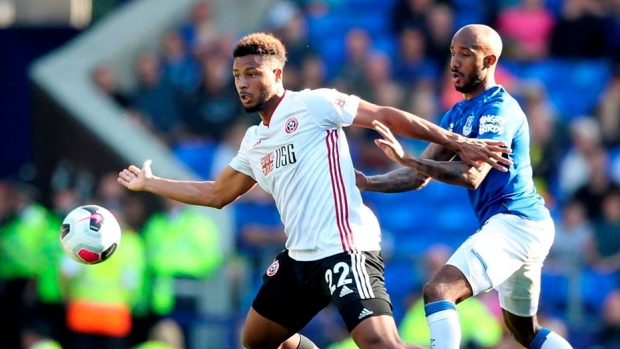 LIVERPOOL, England — Sheffield United managed just one shot on target but came away with a 2-0 victory at Everton in the Premier League on Saturday.

Substitute Lys Mousset's 79th-minute goal came from the Blades' only shot on goal at Goodison Park, with Yerry Mina's own-goal putting the visitors ahead just before halftime.

Sheffield United, back in the top flight for the first time since relegation in 2007, is unbeaten away from home since mid-January and this dogged performance demonstrated why that is the case.

Organized, disciplined and committed to a game plan, United was almost everything the hosts weren't.

Marco Silva's team was previously unbeaten at home since February but, having failed to press home its first-half advantage, Everton bordered on the chaotic in a hastily thrown-together formation as it tried to salvage something after last week's 3-1 loss at Bournemouth.

Everton's domination of possession led to little in the way of chances, with the final pass often wayward or intercepted. For seasoned fans at Goodison Park, what came in the 40th minute was all too familiar.

Goalkeeper Jordan Pickford came to claim Oliver Norwood's inswinging corner, United's first of the match, and although there was shoulder-to-shoulder contact with Callum Robinson, there was not enough — VAR ultimately decided — to warrant a foul.

The ball going in off Mina's shoulder merely added to Everton's embarrassment.

It was 2-0 in the 79th, with John Lundstram rolling a pass down the channel and Mousset putting a shot into the corner.