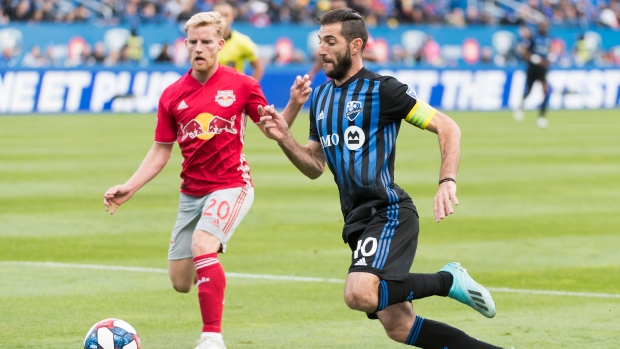 MONTREAL — The Montreal Impact wasted one of their best performances of the season on a game that meant nothing for them in the standings.

The already-eliminated Impact convincingly defeated the playoff-bound New York Red Bulls 3-0 on Sunday on the final day of the Major League Soccer season.

The Impact (12-17-5) snapped a four-game winless streak to finish ninth in the Eastern Conference — four points shy of a playoff spot.

"If only we could have played (the entire season) like we did the last five games," said interim coach Wilmer Cabrera, who improved to 2-4-1 since taking over in August. "We were growing as a team. We were more connected. We were understanding what we wanted to do more.

"It was important to continue, even if it was the last game. We came up short, but we were growing."

Montreal handed New York (14-14-6) its first loss in three weeks. The Red Bulls dropped to sixth in the East and will play the Philadelphia Union at Talen Energy Stadium in the first round of the post-season.

The Impact gave the 15,022 fans at Saputo Stadium something to celebrate for the first time in weeks.

The home team saw more of the ball (60 per cent), completed more passes (525) and were more dangerous in the final third (four shots on target).

It was Montreal's most complete victory since a 4-0 effort against Philadelphia on July 27.

"We enjoyed that game, you could really tell," said Taider, who ends the season with a team-leading nine goals. "That was probably the best game from the second half of our season. We didn't give them much while creating a lot of chances ourselves. We scored three and we could have scored more."

A determined Montreal side put pressure on New York from the opening whistle with early chances from Ignacio Piatti, Orji Okwonkwo and Taider.

The breakthrough came when Okwonkwo blew past two New York defenders in the 23rd minute, raced into the box and squared a ball to Bojan. The former Barcelona midfielder easily tapped it in from six yards out for his second goal in as many games.

It was the first goal conceded by Luis Robles following three consecutive shutouts.

The home side doubled its lead in the 37th through Maximiliano Urruti's fourth of the season. With the Impact claiming a penalty after Jukka Raitala went down in the box, Urruti took advantage of the confusion by stripping substitute Michael Murillo of the ball and beating Robles from a tight angle into the side netting.

"What actually happened on the play is our defender wins the ball and looks like he even goes for a nutmeg in our box," said Red Bulls coach Chris Armas. "He loses the ball and it's in the back of our net. Turnovers against teams built for transition and with quality attackers, you give up 15 goals like that.

"That was a poor mistake on our part."

Okwonkwo put the game out of reach in the 62nd minute when he chested the ball into the back of the net off a cross from Taider.

Piatti left the game in the 85th minute to a standing ovation and fans chanting his name. The Argentine hugged his teammates on the pitch and then each of his coaches on the sidelines.

The Impact's star midfielder, who joined the club in 2014, is waiting to see if Montreal will exercise an option on his contract for 2020.

"The fan reaction was incredible," said midfielder Samuel Piette, whose contract is also expiring. "Nacho has done so much for this club. If tonight was his last Impact game, we wanted to thank him appropriately. Obviously, I want to see him back here."

This report by The Canadian Press was first published Oct. 6, 2019.