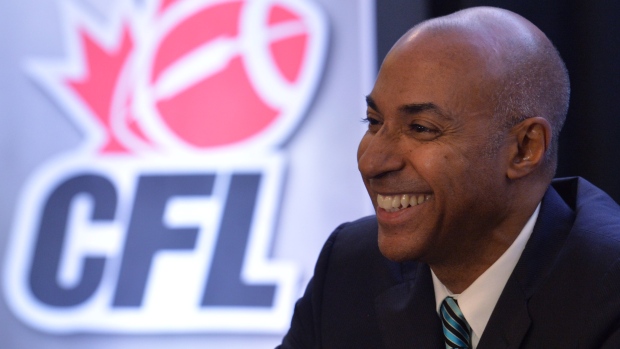 TORONTO - The league that blazed the trail for black quarterbacks in pro football now has its first black commissioner.

Longtime sports executive Jeffrey Orridge will take over the CFL's top job next month. He succeeds Mark Cohon, who stepped down in January after eight years on the job.

"I'm fully cognizant of that and fully embrace it," Orridge said Tuesday after being introduced at a downtown hotel. "I'm very proud of where I've come from, my background, my heritage . . . it's a remarkable thing that we've come this far but it's really been on the shoulders of everybody else who's come before me.

Growing up, the 54-year-old New York native fondly remembers his father praising the CFL for allowing Warren Moon to play quarterback when no NFL team would. Moon starred with the Edmonton Eskimos from 1978 to '83 before heading south and earning nine Pro Bowl nominations over 17 seasons with Houston, Minnesota, Seattle and Kansas City.

"My father and I when I was growing up were watching a CFL game and he said to me, 'This is why I love Canada, Jeffrey,'" Orridge said. "I didn't quite understand and he pointed to Warren Moon and said, 'If you're qualified, if you're capable, if you deserve it you will get an opportunity in Canada and Canada is truly the land of opportunity.'

"That's why the CFL has always held a special place in my heart. It represented to me what Canada was all about. It was about opportunity and access and fairness."

Orridge and his family have lived in Canada since 2007. He's about to become a Canadian citizen.

He'll take over a stable league with a new lucrative television deal and collective bargaining agreement with its players in place through 2018. But questions still remain about the Toronto Argonauts, who've yet to secure a new home with Rogers Centre lease expiring after the '17 season. Owner David Braley and Maple Leafs Sports and Entertainment continue to talk about the Argos playing at BMO Field.

"This city is vitally important to the health of the league, it is a priority," said Orridge. "Obviously it's been discussed for some time and discussions are ongoing but certainly that's going to be one of the lynchpins, I think, in insuring that this league continues to grow and prosper."

"We need to move the needle, we need to reach out to that next generation," said CFL board chairman Jim Lawson, who headed up the commissioner search committee. "Leadership, media, growing revenue, these are all things that hit right in Jeffrey's sweet spot.

As part of his role at CBC, Orridge oversaw rights acquisitions, including the Olympics and the upcoming Pan Am Games. He also structured the multi-year sub-licensing agreement with Rogers for Hockey Night in Canada. Prior to CBC, Orridge was chief operating officer at the Right To Play charity. He's also worked at Mattel Inc., Reebok and USA Basketball.

"Mark Cohon did a great job for the league," said Calgary Stampeders president Gordon Norrie. "From what I hear from Jeff, he's going to be the guy that takes us to the next level.

Orridge said he understands it's a competitive business and that being "more innovative" will be crucial.

"I think because of my background in sports business, marketing, brand-building, licensing, merchandising, contract negotiations . . . I think we're really poised for some very, very exciting things," he said.

First on his priority list will be connecting with CFL fans, something that made the approachable Cohon popular among the league's supporters.

"I'm going to make it one of my goals in the first 90 days of my tenure to visit every stadium, every partner, every environment where the CFL is," Orridge said. "I'd say within the first nine weeks I'll certainly be in nine different cities."