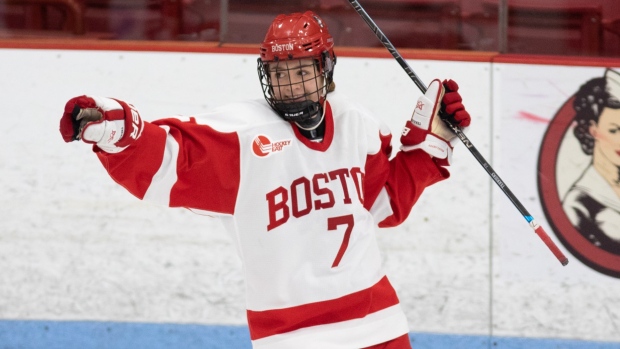 If the American women’s hockey team is going to claim a sixth straight gold medal at this month’s women’s world championship, it’s going to need contributions from other players beyond the big names of Kendall Coyne Schofield, Hilary Knight and Amanda Kessel.

The United States will begin its defence of its 2019 gold medal at the pandemic-delayed 2021 IIHF Women’s World Hockey Championship in Calgary. The top-ranked Americans open the tournament on Aug. 20 against Switzerland, which can be seen live on TSN.

The Americans have been led by some of the biggest names in women’s hockey during this run of gold medals.

In 2019, Knight was the tournament’s top scorer and Coyne Schofield was named best forward. Two years before that, Brianna Decker was named tournament MVP.

While the current U.S. roster boasts 15 players who won gold at the 2019 women’s worlds, it also features several up-and-coming players, many of whom will be making their world championship debuts.

Here are some Americans that fans and opponents will want to keep an eye on at this year’s tournament.

It’s been an eventful year for Buchbinder. The senior for the Wisconsin Badgers made her return to the ice in January after a 10-month layoff due to a combination of COVID-19 and injury. Last September, she had surgery to repair a torn labrum that she had been playing with for a year, a procedure which had been postponed from March due to the pandemic.

Buchbinder’s return to the Wisconsin blue line was summarized by her teammate, Delaney Drake.

“We were able to breathe again,” Drake told Madison.com. “’OK, we’re going to be fine. Nat’s back there. She’s got my back.’”

Two months later, Wisconsin won the national championship, the second straight title for Buchbinder and the Badgers after the tournament was cancelled in 2020. Ten days after that, Buchbinder, a native of Fairport, N.Y., was named to the U.S. roster for the world championship, which was originally slated for May in Halifax and Truro, N.S., before ultimately being rescheduled for August.

“She's certainly capable of being an offensive threat, but also easy for her to settle in and be a stay-at-home defenceman, which is tough to find – someone that can contribute in both ways,” U.S. head coach Joel Johnson told TSN in April. “She can rush the puck, she makes clean exit passes, she's a great offensive player on the blue line with not only her ability to shoot the puck, but just her ability to read the play and instincts that she has.”

Buchbinder’s success this year is just the latest in what is already an impressive career. As a junior, despite playing with a torn labrum, she recorded 42 blocked shots, second-most on the team, and was a plus-29.

On the international stage, she won gold at the 2017 IIHF U18 Women’s World Championship. She made her debut with the U.S. senior team in the 2019-20 Rivalry Series against Canada, picking up an assist in the United States’ 2-1 win in the second game of the series.

“She's just a well-rounded player that I look forward to and that has the kind of skill set [that] gives you a long shelf life as a professional hockey player,” Johnson said.

Compher is coming off an impressive four-year stint with Boston University. She ranks fifth all-time in school history in assists (81) and ninth in points (127). In her sophomore season, she ranked third in the nation with 61 points and was a top-10 finalist for the Patty Kazmaier Award, given annually to the best collegiate player in women’s hockey.

In a pandemic-shortened 2020-21 season, Compher led the Terriers with seven goals and 11 points in nine games, and her 1.38 points per game was fifth best in Division 1. She was also named to the Hockey East All-Star team for a third straight year.

On the international level, Compher, a native of Northbrook, Ill., won back-to-back gold medals at the IIHF U18 Women’s World Championship in 2016 and 2017. She also played with the senior team during the Rivalry Series against Canada at the end of 2019 and spent some time centring the top line.

“Jesse's a really versatile player,” said Johnson “She always has been…. She's that kind of a unique personality that doesn't need to be in the spotlight but isn't afraid of it.”

The youngest player on the American roster, Harvey has yet to make her NCAA debut with the Wisconsin Badgers after signing her letter of intent with the school last fall.

Along with Britta Curl, Lacey Eden and Abbey Murphy, Harvey is in line to become the first U.S. woman born in the 2000s to play in a world championship. She will also be the first 18-year-old American to make her women’s worlds debut since Megan Keller in 2018.

“Caroline is somebody who just kept raising her hand as we went through some evaluation camps, and said, ‘Hey, don't forget about me. I can play too, even though I'm young,’” said Johnson.

Harvey, a native of Pelham, N.H., was also the youngest player invited to an American evaluation camp last year, which did not go unnoticed by Wisconsin head coach Mark Johnson.

“[Harvey] brings a strong compete level who has proven her abilities at the highest level within her age level,” he said. “She brings physicality and finesse to our blue line. She will be relied on to stop opponents' top forwards and contribute offensively on special teams."

Harvey has competed in two IIHF U18 Women’s World Championships, winning both silver (2019) and gold (2020). At the 2020 tournament, she posted a team-best plus-4 rating in five games and was named one of the U.S. team’s top three players of the tournament.

“The reason she's on this team is because she's fast, and she's big, and she's strong,” said Joel Johnson. “When you combine those physical abilities with the unique plays that she's able to make, in particular with the puck – it's just impressive. She's a special player and a special talent… I think as time goes on, you will see that she is one of the most dynamic players for Team USA.”

Harvey will also now have the opportunity to play alongside one of her former coaches on the under-18 team, Brianna Decker, who served as an assistant with the squad.

Roque has been the star of the PWHPA Dream Gap Tour this year. In her professional debut for Minnesota’s Team Adidas on Feb. 27, Roque netted two goals and added two assists in a 5-2 win over New Hampshire’s Team WSF.

She followed that up the next night with another goal and two assists in a contest at Madison Square Garden, the first-ever professional women’s hockey game played at the arena, earning high praise from her teammates.

“I think she’s going to be the best player in the world, plain and simple,” Knight said after the game at MSG. “It’s incredible to see her develop on a daily basis. Watch out for her. The sky is the limit. When she gets to put it all together and gets some time under her belt, it’s going to be lights out.”

Roque finished as the leading scoring in the American section of the Dream Gap Tour with six goals and 11 points.

“Abby Roque can be one of the great players to put on the sweater for USA Hockey,” said Johnson. “There's nobody that plays the game with more pure joy and love for the game while also having a really healthy chip on her shoulder that allows her to compete.”

Her early professional success comes after an impressive career at the University of Wisconsin. As a junior, she helped lead the Badgers to a national championship and Wisconsin was 29-0-2 when Roque recorded at least a point.

In her senior year, she was a finalist for the Patty Kazmaier Award and recorded a career-best 26 goals and 58 points. She finished ninth on the program’s all-time scoring list with 170 points.

Canadian fans may already know Roque’s name, as she made her debut with the U.S. national team in the 2019-20 Rivalry Series, picking up two goals. She’s also a two-time medallist at the IIHF U18 Women’s World Championship, taking home silver in 2014 and gold in 2015. Roque was set to make her women’s worlds debut at last year’s tournament before it was cancelled.

Roque is a dual American/Canadian citizen. Her father, Jim, was born in Sudbury, Ont., and is currently a pro scout with the Toronto Maple Leafs. Roque, who is Native American, grew up in Sault Ste. Marie, Mich., and is part of the Wahnapitae First Nation, located near Sudbury, Ont.

Zumwinkle is coming off a standout season for the Minnesota Gophers, which led to her being named a finalist for the Patty Kazmaier Award as well as an All-American.

She finished with 17 goals in 20 games, second-most in the NCAA, and just eight off her personal best in a shortened season. She has 84 career goals with Wisconsin, 10th most in school history, and 148 points.

Her coach at Minnesota, Brad Frost, told pattykaz.com: “She’s always been somebody that has had a great shot and great speed, but she’s worked incredibly hard on getting to the net and a little more into those greasy areas, and she’s been really successful.”

Zumwinkle already has a winning pedigree on the international stage, winning back-to-back gold medals at the IIHF U18 Women’s World Championship in 2016 and 2017. In the 2017 tournament, she led the Americans in scoring with four goals and six points in five games. She also netted the game-winner in the gold-medal match against Canada, scoring with just over two minutes remaining in regulation.

The native of Excelsior, Minn., was set to make her debut with the U.S. national team at the 2020 women’s worlds before its cancellation.

“Grace Zumwinkle has some separating factors to her game,” said Johnson “There's not many people who can shoot the puck harder or better. But what's equally impressive is the other details that maybe weren't strengths of hers that she has now turned into strengths to get to this level.”