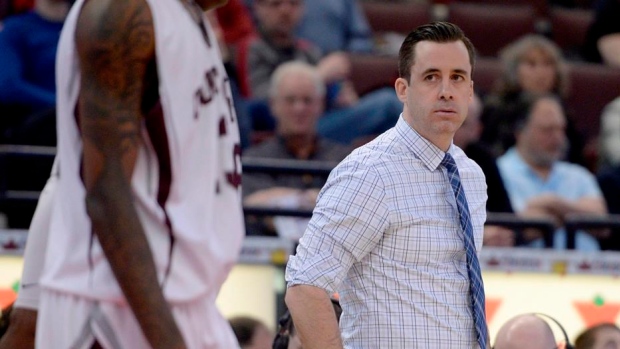 OTTAWA — Even though the Ottawa Gee-Gees had a guaranteed spot in the national university men's basketball championship this season, coach James Derouin didn't change his approach.

For the first time, the men's and women's national U Sports championships are being held at the same venue at the same time this week. Ottawa is the men's Final 8 host while cross-town rival Carleton is hosting the women.

With that, Ottawa received an automatic entry into the tournament.

"Qualifying for the national final in U Sports basketball is one of the toughest things to do in all of sports," Derouin said. "When you have that luxury of that automatic bid, how do you treat things differently? I've taken a lot of feedback but the most consistent thing I heard, and that goes for this week too, just treat it like you always would."

Although TD Place Arena at Lansdowne Park is about halfway between Ottawa and Carleton, Derouin feels like there will be a home-court advantage for his team. The seventh-seeded Gee-Gees face the No. 2 Dalhousie Tigers in one of four quarterfinals Thursday.

"Playing in this gym already … there's a familiarity," Derouin said of TD Place, which was used for the Capital Hoops Classic last month. Ottawa beat Carleton 68-67 in that game — Carleton's only loss of the season.

"We had a successful season and we're excited for the tournament this weekend and showing the country that not only did we get the bid automatically, but we deserve to be here."

Derouin says top-ranked Carleton (21-1) is the tourney favourite, but Dalhousie is "1A."

The Ravens have been a dominant force for years, winning 14 national titles between 2003 and 2019. Carleton comes in as the defending champion after knocking off the Calgary Dinos 84-49 in the final last year.

"When a program in any sport has had a dominant run like Carleton's had, and obviously being a cross-town rival on top of that, any win is huge. It's 10 times a regular win for our school specifically," Derouin said of the Capital Hoops win. "To carry that win into the tournament certainly does give us a level of confidence.

"I can walk into the locker-room at any time and say, 'we've had some tough losses but at our best, we've beaten No. 1' and they should remember that."

The Tigers feature the Atlantic conference MVP in guard Keevan Veinot, the defensive player of the year in Xavier Ochu, and the U Sports coach of the year in Rick Plato.

"You've got two really good teams playing Friday. A lot of people look at it as a tough draw, for both teams, and no one wants to lose in the first round but someone is going to have to," said Derouin. "We're fully aware Dal has had an awesome season and has an awesome team."

The last time Ottawa made it to the gold-medal game was 2015 when it got thumped 93-46 by Carleton in Toronto. Derouin says that game was "a disaster" (he got ejected after receiving two technical fouls) but says he learned a lot from the experience.

With no member of that team still playing for Ottawa, he says his players have a fresh perspective on what it means to play for a national title.

"There's a lot of grit to this team. It's a lot of fun to coach them," he said. "We have our hands full in the first-round game, but we'll be prepared and maybe give the fans another Capital Hoops-type performance."

The other quarterfinal games include the No. 4 Alberta Golden Bears against the No. 5 Western Mustangs, the No. 1 Ravens against No. 8 Calgary in a championship rematch, and the No. 3 UBC Thunderbirds versus the No. 6 Bishop's Gaiters.

The semifinals are Saturday, with the final Sunday.