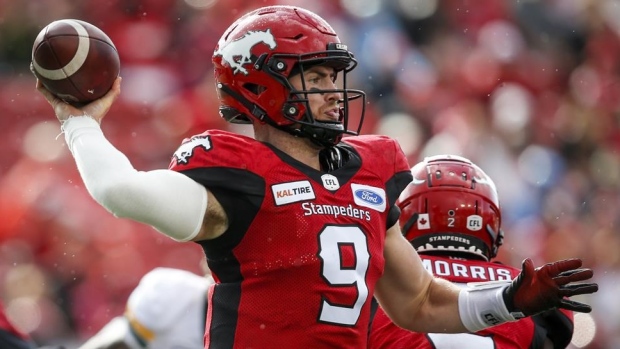 OTTAWA — The Ottawa Redblacks have made a deal for a potential new starting quarterback.

The league's worst club in 2019 acquired the rights to quarterback Nick Arbuckle from the Calgary Stampeders on Friday.

The Redblacks sent a 2020 third-round pick to the Stampeders and Calgary gets a conditional pick if Arbuckle signs with Ottawa. The quarterback is eligible to become a free agent on Feb. 11.

Arbuckle, 26, was backup to Bo Levi Mitchell last season. He rallied the Stamps to a victory in late June when Mitchell got hurt and then went 4-3 as a starter.

In nine games last season, his second in the CFL, Arbuckle completed 174 of 248 passes (73.1 per cent) with 11 touchdowns and five interceptions.

"I thank Nick for everything he did for the Stampeders organization and particularly for the way he performed during Bo's absence last season," Stampeders president/general manager John Hufnagel said in a statement.

The Redblacks struggled badly at quarterback last season after losing Trevor Harris to the Edmonton Eskimos in free agency.

Dominique Davis, Jonathon Jennings and Will Arndt all made starts for Ottawa last season.

The Toronto Argonauts, who hired ex-Stamps QB coach Ryan Dinwiddie as their new head coach late last year, also had been seen as a potential landing spot for Arbuckle. Toronto has just one quarterback — Canadian Michael O'Connor — under contract for next season.

This report by The Canadian Press was first published Jan. 3, 2020

Note to readers: This is a corrected story. Arbuckle's record as a starter was incorrect in a previous version.