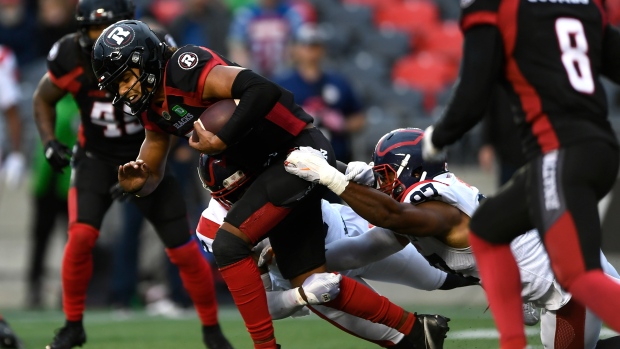 Ottawa Redblacks head coach Paul LaPolice confirmed the team will go back to Caleb Evans under centre Saturday against the Hamilton Tiger-Cats.

LaPolice joined TSN 1200 on Monday and said Ottawa will give Evans another shot one week after he threw three interceptions and was benched in a 27-16 loss to the Montreal Alouettes.

“He’s had two games with multiple interceptions, so just at that point we wanted to make a change just to make sure that he understands you can’t do that,” LaPolice said of the decision to sit Evans down.

“Caleb is doing some good things and we just have to make sure we play better around him and make sure he learns from mistakes. As I told him after the game, you’re part of the growth process and the learning process.”

Redblacks head coach Paul LaPolice on his decision to bench Caleb Evans, will Devlin Hosges dress in Hamilton, his O-Line and update on the health of DeVonte Dedmon.

Evans finished 12-of-23 for 145 yards, one touchdown and three interceptions as the Redblacks lost their third game in a row to drop to 2-8 and even further into last place in the East Division.

“Part of our problem right now is not winning the turnover margin and putting our defence on the field with short fields by turning the ball over. We’ve just done that too much… three interceptions and a fumble from the quarterback position, we have to secure the ball better,” LaPolice said.

The 23-year-old Evans was replaced by Taryn Christion in the fourth quarter, but he was forced to leave the game after taking a sack with 1:33 to play. LaPolice confirmed the injury to be long-term and said the Redblacks will dress former Pittsburgh Steelers quarterback Devlin Hodges as the backup to Evans against the Ticats.

“Taryn will be out for a substantial amount of time. We’ve been meeting with Duck, he’s obviously been in every meeting, we’ve been doing throwing with him. [Our quarterback coach] has been meeting with him and went above and beyond to get him ready. So, we feel he is going to have good command of our offence. Now, he hasn’t had a lot of reps in our offence, but he understands the stuff,” LaPolice said.

The 25-year-old Samford University product played eight games, including six as a starter, for the Steelers in 2019. Hodges completed 62.5 per cent of his passes with five touchdowns against eight interceptions.

“This is a good opportunity for him to become No. 2, get a little bit more reps from week to week and just have him on the roster,” LaPolice said.

Both Matt Nichols and Dominique Davis are on the six-game injured list, forcing the Redblacks to roll with the rookie Evans and Christion, who had never played a CFL game prior to last weekend, at quarterback.

Asked if this was a good chance for Hodges to audition for a potential backup role on next year’s team, LaPolice didn’t want to look that far into the future.