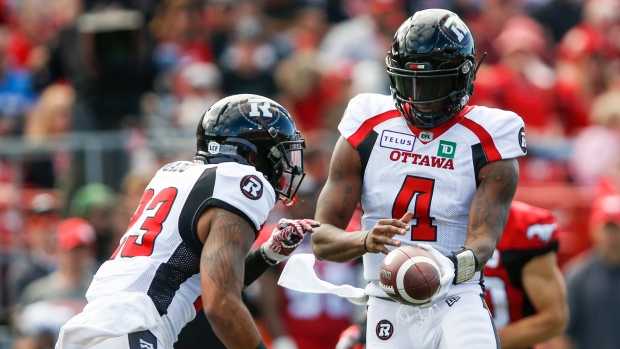 OTTAWA — The Ottawa Redblacks are confident things can only get better.

That being said, Ottawa has little to complain about after pulling off a 32-28 come-from-behind win against the defending champion Calgary Stampeders in its season opener. It was the Redblacks' first win in Calgary since joining the league back in 2014 and it came in a Grey Cup rematch.

However, the Redblacks know they can improve as they prepare to host the Saskatchewan Roughriders (0-1) on Thursday night.

Dominique Davis, making his debut as the Redblacks' starting QB, had his share of struggles last week, but came through when it counted.

The 29-year-old was 29-for-44 for 276 passing yards and rushed for three touchdowns, but also set a franchise record with four interceptions.

"Definitely not the way I expected to play, but definitely did some things good enough for us to win the game," said Davis. “Hats off to the defence and the special teams because they made big plays too shutting down Calgary in the second half.”

While most will focus on Davis' four picks, what shouldn't be overlooked was his ability to bounce back.

"That's one of the best qualities Dom has is that he's able to just shake things off and act like it never happened and get right back out there," said receiver R.J. Harris, who had six catches for 82 yards. "That's the kind of guy you want leading your team. He's able to make a mistake and then the next time he's leading an 80-yard drive. We have the utmost confidence in Dom the entire time."

However, the Redblacks are looking for a stronger performance this week.

"I think we're a really good football team and you prove that when you make mistakes and you still win," said Brad Sinopoli, who had seven receptions for 75 yards. "I think guys understood that there was a lot that we left out there and a lot that we need to correct. We were happy, but we understood that we didn't play nearly our best football."

The Redblacks took 11 penalties for 113 yards against Calgary, which usually isn't a recipe for success.

"I think we have room to grow," said head coach Rick Campbell. "We need to keep learning and keep growing and be smart about things."

Quarterback Cody Fajardo will get the start for the Roughriders, who dropped their opener 23-17 in Hamilton against the Tiger-Cats. The Roughriders lost starting QB Zach Collaros last week after he was hit in the head by Hamilton’s Simoni Lawrence. Lawrence received a two-game suspension for the incident and Collaros has been placed on the six-game injured list.

The Redblacks will be facing a familiar foe as running back William Powell makes his return to Ottawa after signing as a free agent with Saskatchewan.

Powell said he's excited for the game, but won't treat it any differently.

With Collaros out, Powell could shoulder more of the offensive responsibilities.

"It's big any week (to shut down the running game)," said Campbell. "They've got a good O-line and a good tailback and their quarterback can run, too."

LAST YEAR: The Redblacks swept the season series last year against the Roughriders. It marks the second year in a row the Roughriders provide the opposition in Ottawa's home opener.

ON THE RUN: Mossis Madu rushed for 112 yards on 24 carries last week and will likely be eager to prove the Redblacks made the right decision to make him their starting running back.

LINEUP SHUFFLE: The Redblacks made one change to their starting lineup for Thursday’s game as Danny Mason is in at defensive end to replace the injured J.R. Tavai.