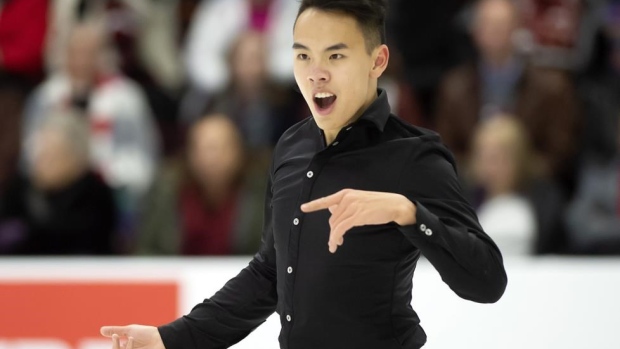 When the bottom fell out on the figure skating season with the cancellation of the world championships in March, Nam Nguyen wasn't prepared for how far he'd fall.

"I didn't realize how hard it had hit me, when I look back at it the realization that everything I'd been training for had just come to an abrupt stop, it was really tough to deal with," Nguyen said Thursday. "The first month of lockdown I honestly didn't do anything. I stayed in bed. I almost hit depression point."

The Toronto skater headlines Skate Canada International, which got the green light to go ahead Oct. 30-Nov. 1 in Ottawa, with no fans.

It'll be the first competition for Canadian skaters since COVID-19 forced the cancellation of the world championships in Montreal, just days before they were scheduled to open on March 16.

With rinks closed in Toronto and elsewhere, Nguyen was off the ice for almost three months — "The longest in my life, ever."

Without the day-to-day training grind and strict schedule the 22-year-old from Toronto was accustomed to, virtual home Zoom workouts weren't appealing. Motivation was in short supply.

"Then I didn't allow myself time to really process and set myself up for when I got back on the ice, so when I got back on the first day, I immediately thought that I needed to be in the same shape that I was going into worlds," Nguyen said. "But it was almost as if I forgot how to skate, my balance point was off. I started to panic. I started throwing myself into these jumps."

His Day 1 goal was landing a triple Axel. It didn't happen.

"I tried again on the second day and I almost broke my ankle and thought 'Man, this is not good,'" Nguyen said. "I'm starting to feel a little bit better, but it's been a long time. I've been through a lot mentally just trying to be myself, feeling confident on the ice. It's definitely been a battle day in, day out."

The six Grand Prix events that traditionally kick off the skating season will be primarily domestic competitions, due to travel restrictions around the global pandemic, and so only open to skaters who live and train in the host countries.

The Grand Prix Final, originally scheduled for Dec. 10-13 in Beijing, was meant to be a test event for the 2022 Olympics, but has been postponed with no new set date.

Figure skating is a sport perfectly suited for a live audience, almost as much an artistic performance as an athletic endeavour.

Nguyen, the 2014 world junior champion, isn't keen on the prospects of skating in a virtually empty arena.

"For me, as a skater, I rely on the fans' energy a lot, because they help me get through the long program," he said.

Canadian ice dancers Piper Gilles and Paul Poirier were scheduled to compete at the 2015 Trophee Bompard in France hours after 127 people were killed in a terrorist attack in Paris.

Skaters were originally told they would compete with no fans. The event was later cancelled altogether.

"That day was very strange," Poirier said. "That was my closest foray into competing without an audience."

"There's definitely a sense of energy that you feed off the audience when you're performing. And there's something really special about that," Poirier said. "(But) everyone's in the same boat. And I think it's going to be one of those things where you can't let it faze you."

When Poirier and Gilles are lost in the moment of a program, the audience fades to the background anyway.

"There's a sense in which if you can really immerse yourself in a performance, you're aware that the audience is there and you feel their energy, but you're sort of so in the performance that you're not noticing any individual people," he said.

When the reigning national champions were permitted back on the ice in June, they were required to physically distance for a few weeks. Poirier said they took advantage of the time to work on their individual skating strengths.

"It was like: how does my body work again? What can it do? How much can I push it?" said the 28-year-old from Unionville, Ont. "It would've been nice to have less time off, it would have been nice to be able to skate together right away. But you have a certain set of constraints, it actually mimics recovering from an injury, and so that's the way we decided to treat it . . . it was very gradual process of coming back."

Following the Grand Prix, the remainder of the skating season is a big question mark. The 2021 world championships are still scheduled for Stockholm in March.

Poirier said this season is about "getting through it unscathed, and just maximizing what we can kind of squeeze out of it in terms of just growing as dancers."

"All the little things I've overlooked in the past, now coming up left, right and centre for me, I have to pay extra attention to it . . . for example, recovery," he said. "I'm being really attentive to every little aspect of what I do.

"Even though I really want to go back and settle myself into the old state which, before worlds was complete confidence in whatever I was doing, didn't have to put too, too much effort in, and I'd still be able to pull it off. But that's not really the case now, so I just have to commit 100 per cent in everything that I do."