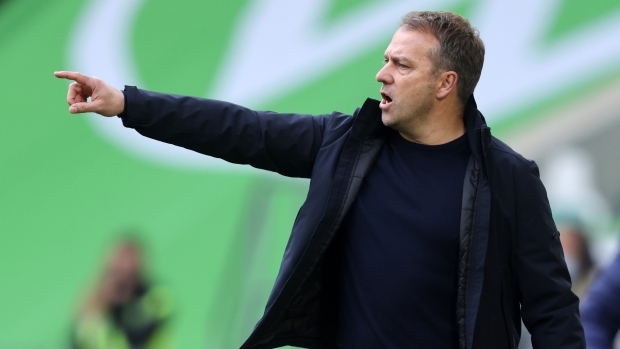 Hansi Flick's next job appears to be lined up and it's exactly the one that everybody was expecting.

The outgoing Bayern Munich manager confirmed on Friday that he's finalizing a deal with the German Football Association to succeed Jogi Low as Germany manager after the Euro.

"Everyone knows how I feel about the national team," Flick, who is leaving Bayern after two seasons, said. "Things still need to be sorted out. It's about little things. If they are settled, we can announce it quickly."

A native of Heidelberg, the 56-year-old Flick served as an assistant under Low for eight years from 2006 to 2014, winning the World Cup in 2014. He joined Bayern, a club he spent five seasons at as a player, in the summer of 2019 as an assistant to Niko Kovac and was made manager upon Kovac's dismissal that fall. In his first season in charge, Flick led Bayern to a treble, claiming the Bundesliga title, the DFB-Pokal and the 2020 Champions League crown. Flick led Bayern to another Bundesliga crown this season.

Flick announced his impending departure from the club in April following a reported falling out with sporting director Hasan Salihamidzic.

Flick's services were rumoured to be of interest at both Juventus and Barcelona, two clubs that could be in the market for new managers in the coming weeks.

Bayern's season comes to an end on Saturday with a home date against Augsburg. Flick says Javi Martinez, Jerome Boateng and David Alaba, three players set to depart the club at season's end up on the expiry of their contracts, are in line for farewell appearances.