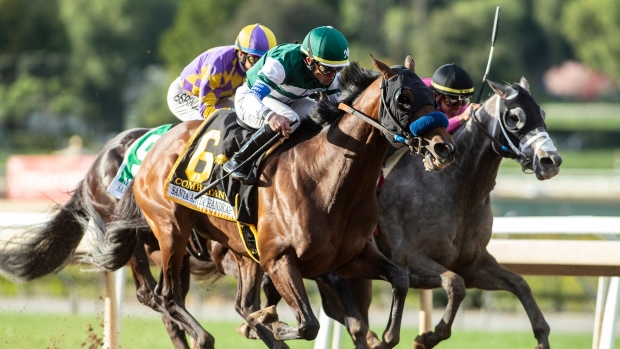 Jason Servis, the conditioner for Maximum Security, was among the trainers, veterinarians and drug distributors charged. Maximum Security made headlines last May when he crossed the finish line first at the Kentucky Derby.

But he was later disqualified for veering out and contacting the Casse-trained War of Will, who was forced to change course and thus impede rivals Long Range Toddy, Bodexpress and Country House. Country House, a 65-1 long-shot, was named the winner while War of Will was elevated to seventh with the disqualification.

Servis is charged with giving Maximum Security a performance-enhancing drug called SGF-1000. He also reportedly recommended it to fellow trainer Jorge Navarro and conspired with a veterinarian to make it look like a false positive for another substance.

Navarro has also been charged.

Four separate indictments outline a program based on the manufacturing and distribution of adulterated and misbranded drugs. Authorities say they were secretly provided to animals under their care "all to the detriment and risk of the health and well-being of the racehorses."

The defendants defrauded and misled regulators "and the betting public," the indictment added. The scheme, according to indictment files, covered races in New York, New Jersey, Florida, Ohio and Kentucky as well as the United Arab Emirates.

"Do you think the trainers who do their jobs and work hard, do you think we're surprised?" Casse said. "Not even a little bit.

"We're just extremely happy that finally it's come out, that someone has listened and done something."

"A sad day for racing but a long time coming," he tweeted. "A good day for those who try to play by the rules, we will all be better for it."

The indictment claims Servis provided performance-enhancing drugs to "virtually all" of his horses from February 2018 to February 2020, which included more than 1,000 races.

The charges come a week after Casse, Canada's top trainer an unprecedented 11 times, called for an immediate halt to the use of Clenbuterol in horse racing in an op/ed piece in the Thoroughbred Daily News.

"This is one of the happiest days of my life as a horse trainer," Casse said. "This says, 'Look, we have a serious problem, we have to fix it and we're going to fix it.'

"We need to clean up the Clenbuterol deal as well."

Clenbuterol was initially developed to treat asthma in horses but can increase muscle mass in the animal while decreasing its bone density.

"This is overdue in racing," said Lawson, who's also on the safety committee of The Jockey Club in New York. "It casts a dark cloud on the industry now but it's a good thing to clean the industry up and let people know it's going on.

"It took more than the racing regulators to be involved, it took a big step with racing authorities getting together saying something had to be done about this. I expect there will be serious ramifications and hopefully that sets a precedent and becomes a deterrent."

Casse, 59, has long been one of North America's top thoroughbred trainers. The Indianapolis native has won all three legs of Canada's Triple Crown and has captured two-thirds of the American Triple Crown and five Breeders' Cup races.

Casse has more than 2,800 career wins with purse earnings surpassing $173 million. Still, he said it's been difficult trying to compete on what sometimes has been an uneven playing field.

"These guys are going to go to jail for a while, fraud is a big thing. Any time you show the public something that's not real, that's fraud."

"I'll tell you this, I'm going to do everything I can to make sure it doesn't," he said. "I've been talking to the biggest in the game, I'm talking about owners of racetracks and heads of racetracks and I think more than ever this has to be stopped . . . it's going to get straightened out.

"People say today is a terrible day for horse racing . . . but I'm looking at it as a new beginning, a time for us to clean up this sport and make it fair for everybody."

This report by The Canadian Press was first published March 9, 2020.