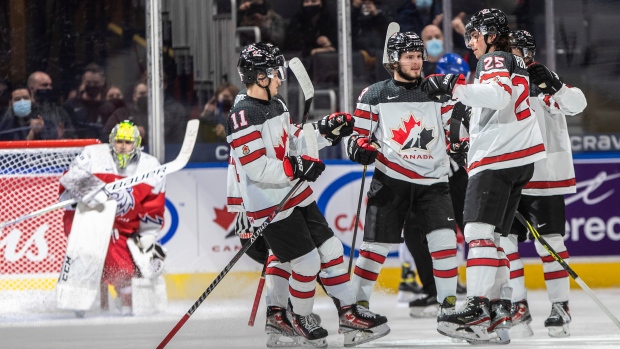 Owen Power scored a historic hat trick to lead Canada to a 6-3 victory over the Czechia in their preliminary round opener at the 2022 IIHF World Championship.

With his third goal of the game in the second period, Power became the first defenceman to score a hat trick for Canada at the World Juniors.

McTavish opened the scoring four minutes into the first period before Michal Gut tied the game for Czechia off a 2-on-1. Gut’s goal was confirmed when the video room buzzed down after it was not given initially on the ice.

Czechia got the first power play of the game and Pavel Novak took advantage with a one-timer to give the Czechs a 2-1 lead.

Stanislav Svozil scored 51 seconds later to put the Czechs up 3-1.

It only took 23 seconds for Power to respond with his first-ever World Junior goal to pull Canada within one at 3-2.

Canadian defenceman Donovan Sebrango would tie the game at 3-3 with 30 seconds remaining in the first period.

In the second period, McTavish drew Canada's first power play as Czechia's Jakub Sedivy went to the box for holding.

With Canada still on the power play, Czech captain Jan Mysak (tripping) and Michal Hradek (cross checking) took penalties to give the Canadians an extended 5-on-3.

Power netted his second with a one-timer on the 5-on-3 to give Canada a 4-3 lead with Cole Perfetti picking up his second assist of the contest.

Canada went back on the 5-on-3 for over a minute and Power completed the hat trick to build the 5-3 lead.

Perfetti finished the game with three assists with Dylan Garand stopping 14-of-17 shots he faced to earn the victory.

Sixteen-year-old Connor Bedard, the youngest player at this year’s tournament, picked up his first World Junior point with an assist on Sebrango’s tying goal in the first.

Czech defenceman David Jiricek, a top prospect for the 2022 NHL Draft, exited the game in the second period after a collision with Canadian forward Will Cuylle. He left favouring his left leg and didn’t return.

Jakub Malek stopped 31-of-37 shots he faced in net for Czechia.

Power was awarded Player of the Game for Canada with Svozil picking up the honour for the Czechs.