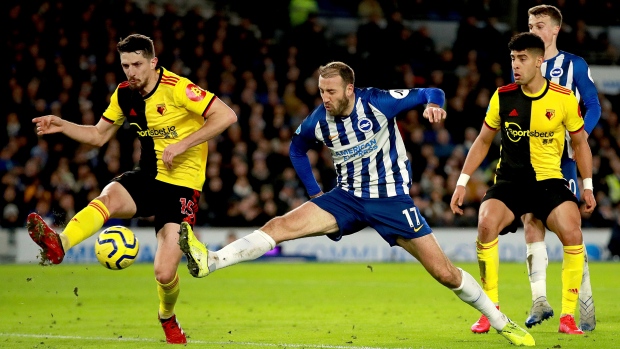 BRIGHTON, England — Watford conceded a late own-goal by defender Adrian Mariappa to draw 1-1 at fellow struggler Brighton and stay in the relegation zone of the English Premier League on Saturday.

The right back was under no pressure when he turned a cross from the right by Alireza Jahanbakhsh into his own net in the 78th minute, denying his team a victory that would have lifted it out of the bottom three.

Abdoulaye Doucoure gave Watford the lead in the 19th when he picked up a loose ball just inside Brighton's half following an interception, surged forward, then smashed a rising shot into the far corner.

Brighton, which has won only one of its last 11 games, remained three points above West Ham and next-to-last Watford in the relegation zone. Watford is a point adrift of safety, but has played a game more than fourth-from-last Aston Villa.