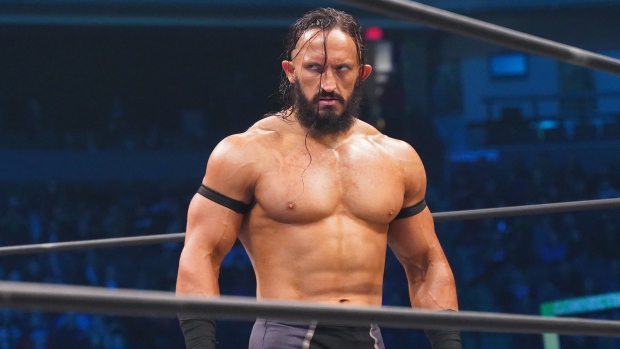 Wednesday night's AEW Dynamite is headlined by a tag-team grudge match as TNT Champion Darby Allin teams up with Cody Rhodes to take on Team Taz of Brian Cage and Ricky Starks. You can catch AEW Dynamite on Wednesday at 8pm et/5pm pt on TSN2, the TSN app, streaming on TSN Direct and on TSN.ca.

TNT Champion Darby Allin and "The American Nightmare" Cody Rhodes (w/ Arn Anderson) vs. Team Taz (FTW World Champion "The Machine" Brian Cage and Ricky Starks) (w/ Taz): If you've watched any AEW programming over the past several months, you know full well that there's a significant amount of bad blood involved in this matchup. The latest flashpoint occurred on last week's Dynamite when Team Taz jumped Rhodes from behind following his promo, prompting Allin to rush in for the save. While Allin has been a thorn in Team Taz's side for quite some time, there is also the question of whether or not Rhodes and the new TNT Champion can actually work together. It was Rhodes who Allin defeated for the TNT title at Full Gear. Is there any lingering resentment between the two men? Another factor to consider in Wednesday night's matchup is the potential presence of Will Hobbs. Will the big man once again make life difficult for Team Taz after seemingly rejecting Taz's offer to join them?

"The Bastard" PAC vs. The Blade (w/ The Butcher, the Bunny and Eddie Kingston): PAC made his dramatic return to AEW after an eight-month absence on last week's Dynamite and found things to be a lot different from when he left. Upon his return, the high-flying Brit discovered that his Death Triangle faction mates, Rey Fenix and Penta El Zero Miedo, had joined forces with Kingston and the Mad King was seemingly in the midst of splitting up the Lucha Bros. After Penta defeated his brother last Wednesday, Kingston literally kicked Fenix out of the ring and told Penta that his brother was deadweight holding him down. Now heading back into action, PAC is forced to deal with another of Kingston's associates in the Blade. The Blade is fresh off a hellacious encounter on last week's Dynamite in which he and the Butcher came out on the losing end of a bloody bunkhouse match against the Natural Nightmares (QT Marshall and Dustin Rhodes). Looking to send a message to both Kingston and the Lucha Bros., is PAC ready to handle an angry Blade looking to bounce back from a brutal defeat?

AEW World Tag Team Title match: The Young Bucks (Nick Jackson and Matt Jackson) (c) vs. Top Flight (Air Wolf and Angel Dorado): The Jacksons' first defence of their AEW titles since defeating FTR (Dax Harwood and Cash Wheeler) for them at Full Gear will come in the biggest match of Top Flight's careers. This will mark only Top Flight's third ever AEW appearance and first on Dynamite. After falling to the Dark Order (Stu Grayson and Evil Uno) on Dark in October, the pair picked up their first win on last week's Dark against Baron Black and Frankie Thomas. The victory was enough to impress the Bucks into giving them a title shot. Still very much an unknown commodity, can Top Flight use that to their advantage and stun the Bucks or will the Jacksons once again demonstrate why they're the top team in AEW?

NWA Women's World Championship match: Serena Deeb (c) vs. Thunder Rosa: The former champion has her shot to get her title back in the third match between these two women in what has quickly become a heated rivalry. The pair first met on the Sept. 2 edition of Dynamite when Thunder Rosa successfully defended her title. But in their rematch on Oct. 27's UWN Live show, Deeb defeated Rosa to take the crown and end her 10-month reign. Deeb was last in action at Full Gear when she defended her title in a victory over Allysin Kay. After the match, Rosa came out to confront the champ and let her know that she wanted her belt back. Can Deeb make it two straight wins over Rosa or will Thunder Rosa become only the seventh multiple-time NWA Women's World Champion in history?

"Freshly Squeezed" Orange Cassidy (w/ Best Friends) vs. "Superbad" Kip Sabian (w/ Miro and Penelope Ford): Cassidy and Sabian meet one-on-one for the first time in their careers on Wednesday night with the simmering feud between Best Friends and Sabian and Miro prominently in the background. The enmity between these men stems from the Oct. 15 Dynamite when Cash Wheeler of FTR threw Trent? into Sabian's arcade cabinet, smashing it into pieces. Sabian sent for Miro and the pair destroyed the Best Friends, kicking off this now bitter rivalry. On last week's Dynamite, Miro got the better of Trent?, submitting him with the Game Over. Will Cassidy and Sabian keep things in the ring or is this match bound to spill over to the outside to everybody else? One thing is for sure, all the elements are here to make this bout a very combustible situation.

- AEW World Champion Jon Moxley and the No. 1 contender "The Cleaner" Kenny Omega meet face-to-face in the ring to sign a contract for their Dec. 2 title match

- MJF treats the rest of the Inner Circle to a Las Vegas vacation - what kind of nonsense will these men get up to and will MJF be able to patch things up with Sammy Guevara?