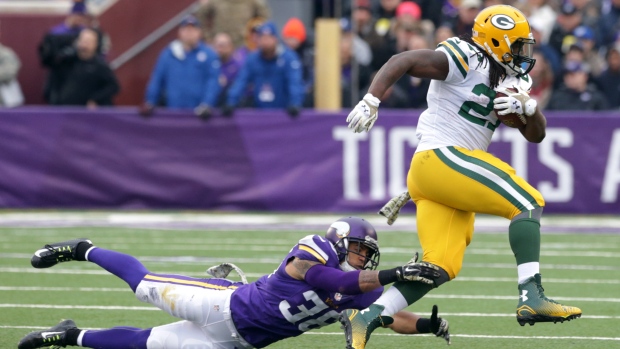 GREEN BAY, Wis. - An extra day between games for the Green Bay Packers could be of help to an injured Eddie Lacy.

A day after the Packers lost Lacy to an ankle injury, coach Mike McCarthy wasn't ruling out his star running back from returning to the field later this week and playing.

"Eddie Lacy wants to play football. I don't think there's any question about that," McCarthy said Monday night. "So if Eddie can go, he'll go."

Lacy suffered the injury to his right ankle in the Packers' 27-17 win over the Seattle Seahawks on Sunday night.

McCarthy said Lacy was in for medical treatment earlier Monday at the team's Lambeau Field facilities.

With the 2-0 Packers' next game not until next Monday against the Kansas City Chiefs, they won't hold their first practice of the week until Thursday.

McCarthy suggested Lacy could get back on the field by then.

"We'll see how he moves around Thursday," McCarthy said. "I think any time you have ankle injuries, particularly with the perimeter players, until they get out there and hit the practice field whether it's in the pre-practice, we really won't know."

Lacy appeared to get injured during the Packers' 10-play, 80-yard touchdown drive in the first possession of Sunday's game when he was tackled from behind by Seattle linebacker K.J. Wright on a run play to the outside.

Lacy didn't return to the game and was taken to the locker room on a cart later in the first quarter.

As a rookie in 2013, Lacy suffered an injury to the same right ankle in the final month of the regular season.

Despite having to move around in a walking boot on non-game days, Lacy was able to finish that season without missing a game. He set single-season team records by a rookie with 1,178 yards rushing and 11 touchdowns rushing.

McCarthy couldn't say whether the degree of Lacy's latest injury and his prognosis is similar to what occurred two years ago.

"It's a medical decision," McCarthy said. "There's a process that goes on with every player that goes through this, and it'll be no different with Eddie."

James Starks filled in for Lacy the rest of the way Sunday and finished with 95 yards on 20 carries as he overcame an early fumble on a pass play.

McCarthy praised the unselfish contributions from Starks since he gained prominence as a rookie during the Packers' playoff run to the Super Bowl title in 2010 after he sat out the first half of the season with a hamstring injury.

"We could play 50-50 with Eddie and James if we had to," McCarthy said. "I have a lot of respect for James Starks."

NOTES: McCarthy said WR Davante Adams was feeling better Monday. Adams suffered an ankle injury in the second quarter of Sunday's game. He returned to the game after halftime. "We'll see how he moves Thursday," McCarthy said. ... The Packers placed DT Josh Boyd on injured reserve and signed LB Joe Thomas off the Dallas Cowboys' practice squad. Boyd, a third-year pro, had to be carted off the field after sustaining an ankle injury in the first half Sunday. Thomas, a first-year player, spent time on Green Bay's practice squad last season and was cut by the team at the end of the preseason this year before he signed with the Cowboys.