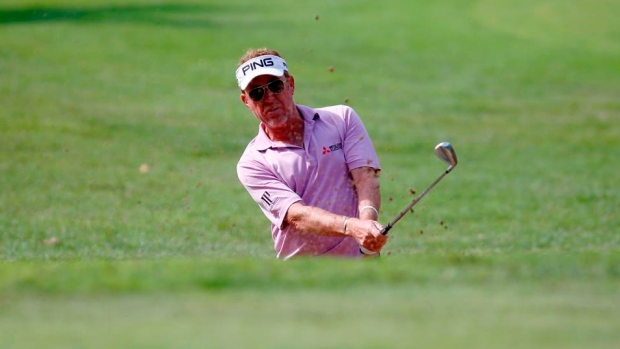 ATLANTIC BEACH, Fla. — Chris Paisley birdied four of the last five holes for a 10-under 61 and the first-round lead Thursday while Canada's Ben Silverman finished the day in a tie for second place in the season-ending Web.com Tour Championship.

The South African Open winner in January for his first European Tour title, Paisley played the back nine first at Atlantic Beach Country Club, holing a bunker shot for an eagle on the par-5 18th. On the front nine, he birdied the par-3 fifth and finished with three straight birdies.

"I think just all around was really good," Paisley said. "I hit it well off the tee, which gave me a lot of kind of short irons into the greens and opportunities. I hit a lot of really good iron shots close, and then a few other bonus kind of things happened where I holed the bunker shot on 18 and holed a long putt on No. 8."

The 32-year-old Englishman missed the cuts in the first three Web.com Tour Finals events after getting into the series as a non-member PGA Tour with enough money to have placed in the top 200 in the FedEx Cup. The final card went for $40,625 last year, with Paisley needs to finish in a two-way tie for fourth or better to mathematically have a chance to secure one of the 25 PGA Tour at stake.

"The nice thing was I won early in the year in Europe," said Paisley, a former University of Tennessee player. "I've got the first two Final series events locked up, I think I'm in those. I'm not guaranteed to be in Dubai yet. But I just thought we have a house over here, my wife's American, my goal is to try to get on the PGA Tour, so it was a perfect opportunity to try and do it."

Lucas Glover was at 64 with Ben Crane, Nicholas Lindheim, Matt Every, Trevor Cone, Denny McCarthy, Carlos Ortiz and Jose de Jesus Rodriguez. Carlos Ortiz and Jose de Jesus Rodriguez earned PGA Tour cards as top-25 finishers on the Web.com Tour regular-season money list, and McCarthy has made $75,793 in the first three Finals events to also wrap up a card. In the race for the 25 cards, Lindholm is 19th with $35,836, Every 30th with $25,733, Glover 40th with $17,212, and Cone 59th with $8,162