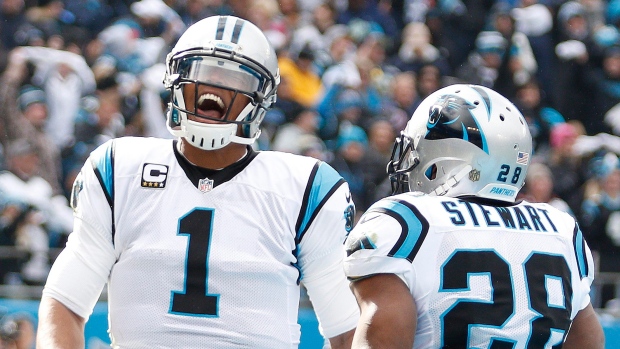 CHARLOTTE, N.C. - Four games into his playoff career, Cam Newton recognizes the key element to success. He calls it "Big Mo," and there couldn't have been a better example than Carolina's 31-24 victory over Seattle on Sunday.

Emphatically backing up their superb regular season with one of the most dominating halves in football history, the Panthers then hung on in the face of a furious Seahawks rally before surviving.

"The playoffs bring out more than any other time the impact of 'Big Mo,'" Newton said after Carolina (16-1) moved into NFC title game, which they will host next Sunday against Arizona (13-3). "Momentum.

"We can't wait for no one to make plays for us."

The Panthers, winners of 12 straight at home, made all the right plays in building a 31-0 lead, then were dominated by the two-time defending NFC champs in the second half. So if Carolina wins its first NFL championship, it can credit the lesson learned from the Seahawks (11-7).

"We have to find a way to complete a full game of football," the All-Pro quarterback added. "We have been known to take our foot off the throttle and we have to find that killer instinct."

Newton noted how players, coaches and even the fans were feeling the pressure in the final 30 minutes as Seattle staged a relentless comeback.

"It was a tale of execution. We needed a little more of that in the second half. You just have to find ways to get your groove back on."

"That's what this game is going to teach us," said All-Pro linebacker Luke Kuechly, who returned a first-quarter interception for a touchdown. "No matter how good you play in the first half, the second half is just as important. It's crazy - you go into these games and you expect it to be like this, so it wasn't a surprise for us. But you've got to be locked in the whole game. "

Jonathan Stewart, returning from a foot injury, scored two touchdowns after jumpstarting the Panthers with a 59-yard sprint on their first play. Newton threw for a touchdown.

Then, Seattle showed its pedigree and climbed back within seven points.

"We made a mess of it in the first half," Seahawks coach Pete Carroll said. "We look at this game as a microcosm of the season. We struggled so much early in the season to get going, and it took us a long time. When we finally did, we caught fire, and got rolling. Everyone in here just feels like we ran out of time."

Not before they got two touchdowns in the first 7:20 of the third quarter. Finally with time to throw, Russell Wilson hit Jermaine Kearse for a 13-yard score and rookie Tyler Lockett for 33 yards, making it 31-14 — and making the full house at Bank of America Stadium unnerved.

When the Seahawks succeeded on a fake punt from their 23, an epic comeback seemed possible. That drive stalled, but with Carolina's offence sputtering, Seattle later got closer on Kearse's 3-yard catch of a jump ball against All-Pro cornerback Josh Norman.

With Newton waving the crowd into frenzied cheers on the sideline, the Panthers' defence couldn't stop a 60-yard drive capped by Steven Hauschka's 36-yard field goal with 1:12 remaining.

"In the second half, we had to go for it," Wilson said. "We had to come out swinging. That was our mentality, and we did a great job of that. "

This will be the Panthers' fourth trip to the NFC championship game, and their first time as host.

Carolina, which scored an NFL-best 500 points this season, stormed into the lead thanks to Stewart. He burst through the middle on the first snap and nearly outran everyone, getting tackled at the Seattle 16 by Richard Sherman. Three plays later, Stewart surged into the end zone.

His return from a foot injury that cost him three games was far more distinguished than Marshawn Lynch's comeback from a two-month absence (abdominal surgery). Lynch, who finished with 20 yards on six carries, was nailed in the backfield for a 3-yard loss on his first touch, then turned around late for Wilson's pass over the middle under pressure from Kawann Short.

Kuechly was far more alert, grabbing the interception and sprinting 14 yards to make it 14-0 only 3 1/2 minutes in.

The scoring barrage continued as Stewart leaped in from the 1 to make it 21-0.

Wilson was picked off under relentless pressure again, this time by Cortland Finnegan at the Seattle 29. Graham Gano's 48-yard field goal made it 24-0. Greg Olsen's spectacular 19-yard reaching catch over double coverage made it 31-0.

But that ended the onslaught, and the Seahawks who returned for the second half were an entirely different team, energetic and efficient.

Wilson, who was sacked five times, made some big throws, particularly to Kearse, who had 11 catches for 110 yards. Wilson went 31 for 48 for 366 yards, but the early turnovers — Seattle had an NFC-low 16 in the regular season — and spotty defence were too much to overcome.