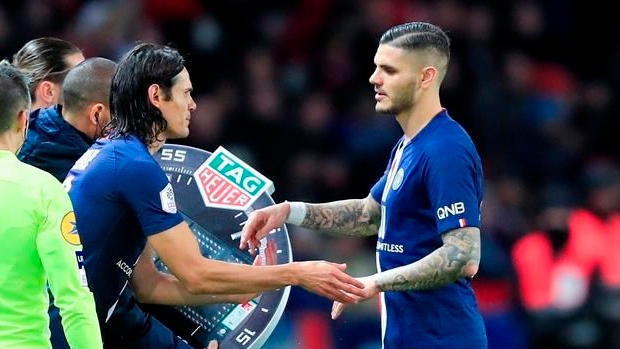 There was a time at Paris Saint-Germain when Edinson Cavani was indispensable.

The club’s all-time leading scorer with 195 has become a spectator at matches, and speculation grows week by week in the French capital that the striker is on his way out.

Since then, he has been appeared in just four games, starting only one, and has dramatically fallen down the pecking order.

To the surprise of many Real Madrid fans, he remained on the bench midweek in the Champions League when PSG coach Thomas Tuchel decided to replace Angel Di Maria and Mauro Icardi and sent on Julian Draxler and Pablo Sarabia.

Cavani’s complicated situation at a club where attacking potency has not been in short supply has sparked many rumours, including one linking him with the Los Angeles Galaxy. Cavani’s agent, Walter Guglielmone, has dismissed the report as nonsense but hinted at an exit from PSG for his 32-year-old client.

“It will depend on the club’s project,” Guglielmone said in an interview with Italian media, acknowledging that contacts had been made with Serie A clubs. “Edi has at least three more years to play at the highest level. He can play for any major team in Europe.”

The biggest blow to Cavani’s career at PSG has been Icardi’s arrival to the club. Having joined the French champions in September on a season-loan deal from Inter Milan with an option to make the move permanent, the Argentina striker has been flourishing in Tuchel’s team, with 10 goals in 12 matches in all competitions.

Recent history, however, shows it would be premature to bury Cavani so quickly, as it’s not the first time the status of the Uruguay striker at PSG has been questioned.

After joining PSG from Napoli in 2013, Cavani was initially mocked for his profligacy as he struggled to impose himself in former coach Laurent Blanc’s 4-3-3 formation. With Zlatan Ibrahimovic positioned in a central role, Cavani was forced to change position and played on the wing.

After years in the shadow of the imposing Swede, things improved when Ibrahimovic left for the English Premier League and the long-haired Cavani took over the leadership.

Cavani’s status was then weakened by Neymar’s arrival in Paris, but Cavani flexed his muscles and showed his strength of character to come out on top of his war of egos with the Brazil star, with then-coach Unai Emery keeping him in his favouritecentre-forward role.

For Cavani, patience has always paid off in Paris.

But this time, at 32, he has not much time left to remain patient.