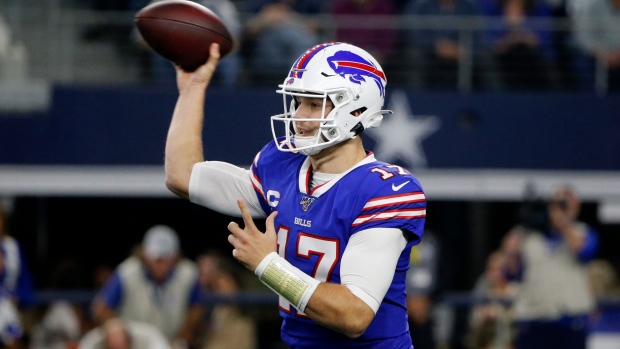 Five teams are in position to clinch playoff berths in Week 15 of the NFL schedule.

In the AFC, where Baltimore has won the North and Kansas City has taken the West, both New England and Buffalo can get in from the East.

The Patriots do so with a win or tie at lowly Cincinnati. The Bills clinch if they win at Pittsburgh in the Sunday night game. Neither team can secure the division crown regardless of how they do Sunday.

Baltimore can grab home-field advantage throughout the AFC playoffs if the Patriots lose and the Chiefs also fall at home to Denver. The Ravens get a first-round bye if New England or Kansas City doesn't win.

In the NFC, where New Orleans owns the South title, Green Bay's place in the post-season will come if it beats Chicago at Lambeau Field and the Rams lose or tie at Dallas.

San Francisco moves on with a victory or tie against Atlanta or a Rams loss or tie or losses by Green Bay and Minnesota, which is at the Chargers.

Finally, a Seattle victory and a Rams loss or tie, or a Vikings loss, or a Packers loss and Vikings tie gets the Seahawks a spot.

Seahawks inactives vs. the Panthers pic.twitter.com/6otUkDLja2

Noah Fant is ACTIVE for #DENvsKC.

Here are the #Chiefs’ inactives today against the Broncos: